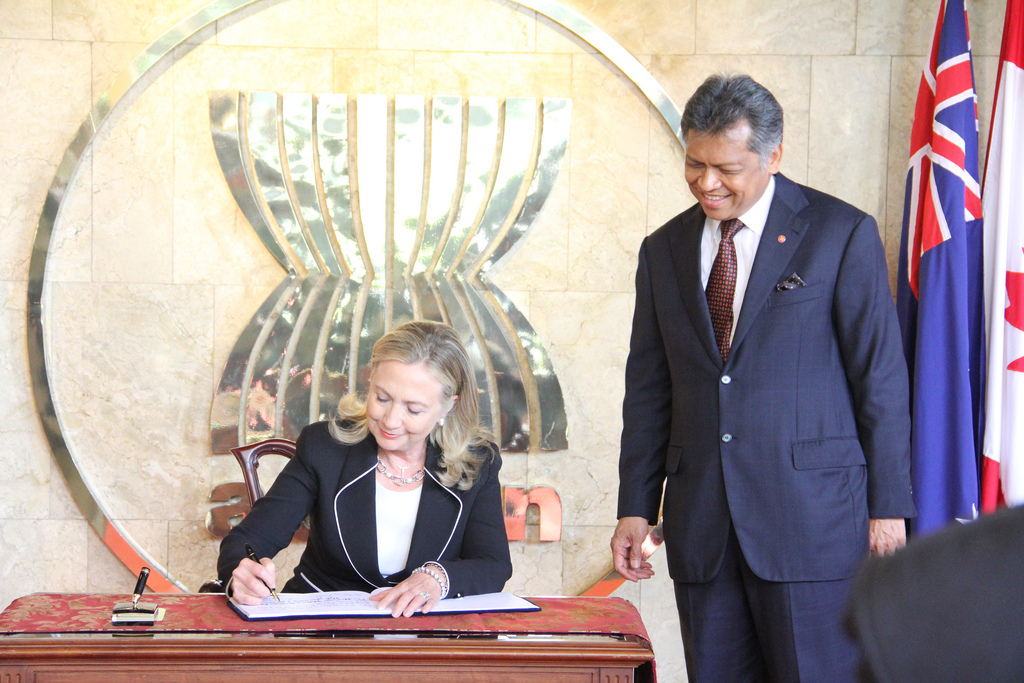 U.S. Secretary of State Hillary Clinton signs the guest book upon arriving at the ASEAN Secretariat in Jakarta.

(The following are remarks by U.S. Secretary of State Hillary Clinton during a meeting at the ASEAN Secretariat with ASEAN Secretary General Dr. Surin Pitsuman and the ten Ambassadors of ASEAN’s Committee of Permanent Representatives (CPR)

ASEAN SECRETARY GENERAL SURIN: Secretary Hillary Rodham Clinton, chair of ASEAN program representative, Excellencies, members of the CPR, it is a great privilege for us to welcome the Secretary here for the second time in her term. And I remember very well on the 18th of February you were here. Your first trip to the world you came to Asia. You came to the ASEAN Secretariat. You became the highest ranking ever official of the United States Government to visit us. And ever since, this place has been a routine destination for visiting dignitaries to ASEAN, to the Republic of Indonesia.

At that time you promised many things. You promised full engagement with ASEAN, with Southeast Asia. You promised to accede to our Treaty of Amity and Cooperation. You have promised the highest presidential engagement. You have promised to come to attend our post-ministerial (inaudible) conference, ARF. And I am glad to say that you have delivered it all. Thank you very, very much. Along the way we were a bit skeptical and we asked you — we challenged you we would believe in the change when you delivered everything that you had promised us. And you did. And we certainly feel very much honored to welcome you here.

Now, let me just say that most of the diplomats we work with, they are counterparts. And you have turned your counterparts here in Southeast Asia, in ASEAN, into your friends. And friendship is extremely important for the region and for the region’s diplomacy. We count you not as counterpart, but as a true friend. That is why today is very special. And we hope that we will accomplish many more things together into the future with the United States and ASEAN.

SECRETARY CLINTON: Thank you so much, my friend. And let me express what a pleasure it is to be back in Jakarta and to have this second opportunity to visit the ASEAN Secretariat.

As Dr. Surin has said, I came here in February of 2009 with the intention of deepening and broadening and elevating the relationship between the United States and ASEAN. And we have worked to do just that. I believe our relationship is stronger and more effective. And that is all to the good, because the United States views ASEAN as central to regional stability and economic progress in the Asia-Pacific.

We did sign the Treaty of Amity and Cooperation, as I said we would, and I visited back in February of 2009. We were the first dialogue partner to open a mission to ASEAN. And I am pleased that others are also doing that. We appointed our first resident U.S. Ambassador, and Ambassador Carden holds regular meetings with his counterparts in the ASEAN Committee of Permanent Representatives, whom we soon will welcome on their first official visit to the United States. We have engaged with ASEAN at the highest levels, with President Obama attending three U.S.-ASEAN leaders meetings, as well as the East Asia Summit, here in Indonesia last year.

Later this month, I will host my ASEAN counterparts in a meeting on the margins of the UN General Assembly. We have devoted resources to supporting ASEAN’s goal of economic and political integration through the Advance program to narrow the development gap among ASEAN nations, and to promote and protect human rights. We are increasing our People-to-People ties through the ASEAN Youth Volunteers program and the U.S.-ASEAN Fulbright program, which we are now launching.

In short, we are making a sustained, all-out effort to build an enduring, multi-faceted relationship between ASEAN and the United States. We want to do all we can to advance ASEAN’s goal of integration, because we have an interest in strengthening ASEAN’s ability to address regional challenges in an effective, comprehensive way.

And we really invite and need ASEAN to lead in crafting strong, regional responses to challenges like climate change and trans-national crime, which require collective actions. And we need ASEAN to lead in upholding a system of rules and responsibilities that will protect regional stability and guide the region to greater political and economic progress.

So, Dr. Surin, it is a great honor for me now to have returned for a second visit to conduct, if you will, a progress report among partners and friends, and to state once again what I have said in other contexts. The United States believes in ASEAN centrality, and ASEAN centrality is essential to ASEAN unity. So I am looking forward to our exchange today and the dialogue among us, looking forward to continuing to work on behalf of the U.S.-ASEAN relationship.