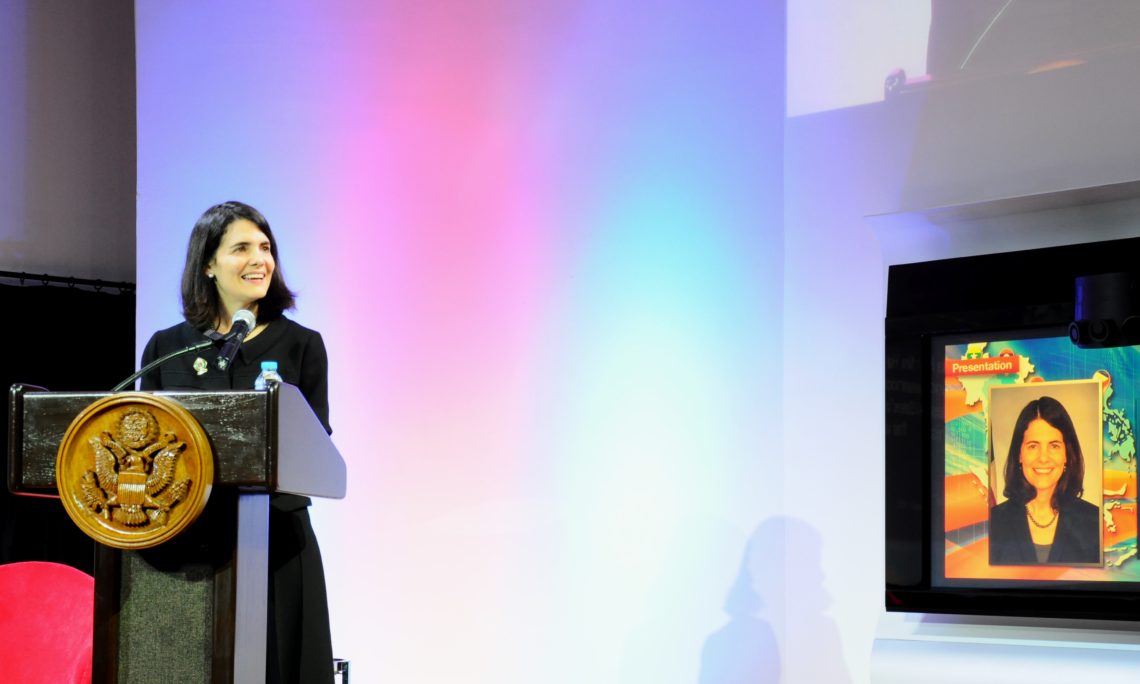 As prepared for delivery

Thank you, Ambassador Blake for the kind introduction. I am grateful to be your colleague and honored to work alongside you here in Jakarta.

What a pleasure to be at @america with all of you.  I was here yesterday for the first time and this space IS impressive. And this is the first time I’ve ever been preceded by a video of myself, which feels a bit strange.

I am going to talk for a little while, but when I am done, I want to hear from you. So think about what you want me to know about ASEAN, about Southeast Asia, about Indonesia and give me some good advice. OK?

I am the third speaker in just two weeks to be on this stage talking about ASEAN. Yesterday my colleague, and the first U.S. Ambassador to ASEAN, Scot Marciel, spoke here and last week it was my Public Affairs Officer, Phil Hoffmann.

This is not a coincidence. We are all talking about ASEAN because, plain and simple,

Now, I don’t have to tell you–ASEAN’s countries are very diverse. Major cosmopolitan cities, like Jakarta, shine alongside poor rural villages. All the world’s major religions converge here in SE Asia. And yet these countries have chosen to bind themselves together. Not through power, but through principles. Through a dedication to non-violence and respect for international law, values the United States also holds dear. These shared values are the first reason ASEAN is so important to the US.

The United States knows that multilateral diplomacy is important in Southeast Asia, and we support ASEAN’s leading, central role. We share the vision of a secure, peaceful, and prosperous region. America values ASEAN because ASEAN makes sure that all the nations in Asia have a seat at the policy table.

In October, Secretary of State John Kerry said that ASEAN is “the best way to ensure that countries big and small are going to have a voice as we work together”.

President Obama had the wisdom to appreciate what ASEAN was and what it could become. In 2008, Scot Marciel, who was here yesterday and is now working on SE Asia policy in Washington DC, became the first Ambassador of ASEAN Affairs.

The US knows that Southeast Asia will play a major role in the history of the 21st century. This vibrant, young, diverse region also faces a host of “21st century” challenges. These challenges do not recognize national borders. And because they don’t, we all need to work together. That is another reason why ASEAN is so important to the US.

While it works methodically, ASEAN, the organization, is quite ambitious. It seeks to make progress on the toughest and most important issues facing humanity– from equitable economic growth to climate change to human trafficking and everything in between.

Last month, I joined President Obama at the ASEAN-U.S. Summit in Myanmar, where he reaffirmed the importance of U.S.-ASEAN ties as a crucial element of America’s strategic rebalance to Asia.

During his visit, President Obama said that “a strong relationship between the United States and ASEAN is essential to realizing our shared vision for the future of the Asia Pacific.”

He went on: “the United States is committed to strengthening ASEAN, both as an institution and as a community of nations bound by our shared interests and values.”

Most recently, our shared commitment resulted in the ASEAN-U.S. joint statement on climate change. This is a big deal. We have never done anything like it before. It outlines our determination to offer up what we can do individually as nations to combat climate change and our commitment to continue working together to build more climate resilient societies. This statement shows ASEAN taking leadership on a global issue and helping the world build momentum for a global climate change agreement next year.

Young people today don’t have the luxury that I did when I was young of not paying too much attention to trans-border challenges like climate change.  And because a full 65% of ASEAN’s population is under the age of 35, the future here undeniably relies on engaging and empowering the young.

The United States is delighted to work with the young people of ASEAN to help them contribute to ASEAN and to our world. That is why we support programs like

These programs offer young people a platform to develop themselves in ways that go far beyond what they learn in a classroom, or their professional careers.  They are helping to create an ASEAN identity that the participants will carry with them the rest of their lives.

Last month in Myanmar, President Obama highlighted the success of YSEALI.  Since its launch last December, over 10,000 young people in this region have decided to join YSEALI, and I hope you do too. It is very easy to do—just go online, type YSEALI into a search engine, fill in just a few pieces of information about yourself, name, email, country and year you were born, and that is it.  It can open up opportunities for you in Indonesia, in the region and in the U.S. including 500 exchanges to United States.

YSEALI is creating a group of young Southeast Asian leaders like you to work across ASEAN borders to solve common problems. Just to give you an idea of what YSEALI is doing: 300 of your peers have studied in the U.S. and another 300 have attend regional workshops – there is one going on right now in Singapore.

In addition to YSEALI, our mission supports another initiative: the ASEAN Youth Volunteer Program. Last week I was in Malaysia to attend the launch of the next phase of our three year commitment to this exciting program. This program promotes youth volunteerism and community development within ASEAN.  I met with two of the alumni who had worked on a program on biodiversity and had helped to plant Mangroves in a rural area in Malaysia.

I also want to mention our Fulbright U.S.-ASEAN Visiting Scholars Initiative, which is entering its third year. The U.S. has sent scholars representing all ten ASEAN member states to study for up to four months in the U.S. and bring back what they have learned to the region.

As an example, Mrs. Siti Salwah Saim did research on climate change and disaster preparedness on her exchange. Her research was recently featured by the Sultan of Brunei at his speech at the UN Climate Summit in New York.

Her research actually contributed to decision making at the highest levels of government.

In addition to our shared interest in youth development and education, the U.S. is also working with ASEAN to develop a strong, stable, and prosperous region.  The U.S. knows that our economic future is tied to Asia. It has been a remarkable engine of global growth. And the US recognizes the role this region – your region – will continue to play in promoting global economic prosperity.

Next year, ASEAN will come together even more closely as an economic community. ASEAN integration means our and your businesses, large and small, will have more trade opportunities. This is another reason ASEAN is important to America. These opportunities will create more jobs.  American businesses have been the number one investor in ASEAN economies for decades.

In fact, U.S. private sector investments are larger than Chinese investments, Japanese investments, and Korean investments combined. As Secretary Kerry said recently, “it’s not just about the quantity of our investments; it’s about the quality. When we invest in countries, we actually do it differently. When businesses from some countries enter new markets, they bring in their own workers…. We, on the other hand, hire local employees. And guess what – we train them as well.”

The United States supports ASEAN integration and we have funded programs that make cross-border trade easier and also supported initiatives that promote economic opportunities for women entrepreneurs and small businesses.

It is an exciting time to be in ASEAN and 2015 is a big year. Last month President Obama said “we will be stronger together than when we act individually”.

And I look forward to continuing to work with ASEAN in the year ahead.

Now what I want to do is stop talking and get to the interesting part, which is hearing from you. Tell me your views about ASEAN, SE Asia and whatever issues are most on your mind. Please tell me what you think I should know as I begin this new, exciting job. If you have questions, I’d be happy to take them, but I am truly interested in hearing your advice too.