The U.S. Vision for the Indo-Pacific
By U.S. Mission to ASEAN
10 MINUTE READ 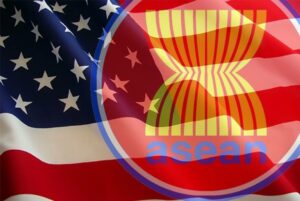 The U.S. Vision for the Indo-Pacific

The United States’ vision for the Indo-Pacific is a free and open region comprised of nations that are independent, strong, and prosperous. Advancing a free and open Indo-Pacific is a whole-of-government effort focused on three pillars: economics, governance, and security. This vision is built on principles that are widely shared throughout the region: ensuring the freedom of the seas and skies; insulating sovereign nations from external coercion; promoting market-based economics, open investment environments, and fair and reciprocal trade; and supporting good governance and respect for individual rights. These values and policies have helped this region grow and thrive.

The Indo-Pacific region, spanning from the west coast of the United States to the west coast of India, is central to U.S. economic and security interests. The region has enjoyed unprecedented prosperity and improvements to standards of living over the last three decades, thanks in part to American engagement. Our presence secures vital Indo-Pacific interests and strengthens the international system of clear and transparent rules.

Cooperation with partner countries and regional institutions, such as ASEAN, is at the center of our approach. The Indo-Pacific is not a concept unique to the United States but is shared by many nations in the region. Though our respective visions may differ somewhat, our Indo-Pacific policies and those of our allies and partners are complementary and similarly guided by a commitment to uphold the rules-based order in the region.

One-pager Summary of U.S. Commitment to the Free and Open Indo-Pacific

With a population of 650 million, average GDP growth of five percent nearing $3 trillion, and a young, tech-savvy demographic, the ten Association of Southeast Asian Nations (ASEAN) countries make up one of the world’s most dynamic ‎regions. Over the past 42 years, the United States and ASEAN have worked together to promote peace, stability, and prosperity. The U.S.-ASEAN relationship began in 1977 and was elevated to a strategic partnership in 2015. We see strong convergence between the principles enshrined in ASEAN’s Indo-Pacific Outlook—inclusivity, openness, a region based on rule of law, good governance, and respect for international law—and the vision of the United States for a free and open Indo-Pacific, as well as the regional approaches of our allies, partners, and friends.

The United States seeks a constructive, results-oriented relationship with China. The United States works to achieve concrete progress on U.S. interests, including ensuring Chinese support for exerting maximum pressure on North Korea to end its nuclear program, reducing the U.S. trade deficit with China, and stopping the flow of illegal opioids from China to the United States. The United States also seeks progress on areas of disagreement such as China’s territorial claims in the South China Sea and lack of respect for human rights and religious freedom, including in Xinjiang.

The United States’ goal is to achieve the final, fully verified denuclearization of the DPRK, as committed to by Chairman Kim at the June 2018 Singapore Summit. The United States is committed to a diplomatic process to eliminate the threat to international peace and security posed by the DPRK’s weapons of mass destruction and ballistic missile programs. We are working with our allies and partners around the world to ensure the international community continues to implement and enforce existing sanctions until North Korea denuclearizes.
As the U.S. Special Representative for North Korea, Stephen E. Biegun is responsible for all North Korea policy.

The U.S.-ASEAN Smart Cities Partnership (USASCP), announced by Vice President Pence in November 2018, seeks to harness the expertise of U.S. public and private sectors and collaborate with the ASEAN Smart Cities Network (ASCN) to meet the varied challenges of rapid urbanization and help improve the lives of people in the region. With an initial investment of $10 million, the USASCP develops activities and programs to promote U.S. private sector engagement in smart city solutions and the digital economy in ASCN cities, share best practices and promote collaboration between innovative programs in U.S. cities with their ASCN counterparts strengthening capability and capacity at the sub-national level. This is a whole of government effort that includes participation from, among others, the Department of State, Department of Commerce, Department of Transportation, National Science Foundation, USAID, U.S. Trade and Development Agency, and U.S. International Development Finance Corporation.
For further information please visit www.usascp.org or contact USASCP@state.gov.

The Young Southeast Asian Leaders Initiative (YSEALI) is the U.S. government’s signature program to strengthen leadership development and networking in Southeast Asia. Through a variety of programs and engagements, YSEALI seeks to build the leadership capabilities of youth in the region, strengthen ties between the United States and Southeast Asia, and nurture a community of leaders who work across borders to solve shared issues.

Young Pacific Leaders (YPL) is a youth leadership development program organized by the United States Department of State. This comprehensive conference provides emerging Pacific leaders, ages 25-35, with new skills and knowledge to advance the region’s economic vibrancy and civic engagement, thereby contributing to regional security and development. At the conclusion of the conference all participants will be eligible to compete for small grants to support projects in their countries and the region.

The program started in 2013 and has held five regional conferences in American Samoa (2013), Independent State of Samoa (2014), Auckland (2015), Honolulu (2016 and 2018), and Suva, Fiji (2019). In 2018, the YPL Small Grants Program was launched—providing seed funding annually to implement 12 innovative projects run by YPL members throughout the Pacific region.