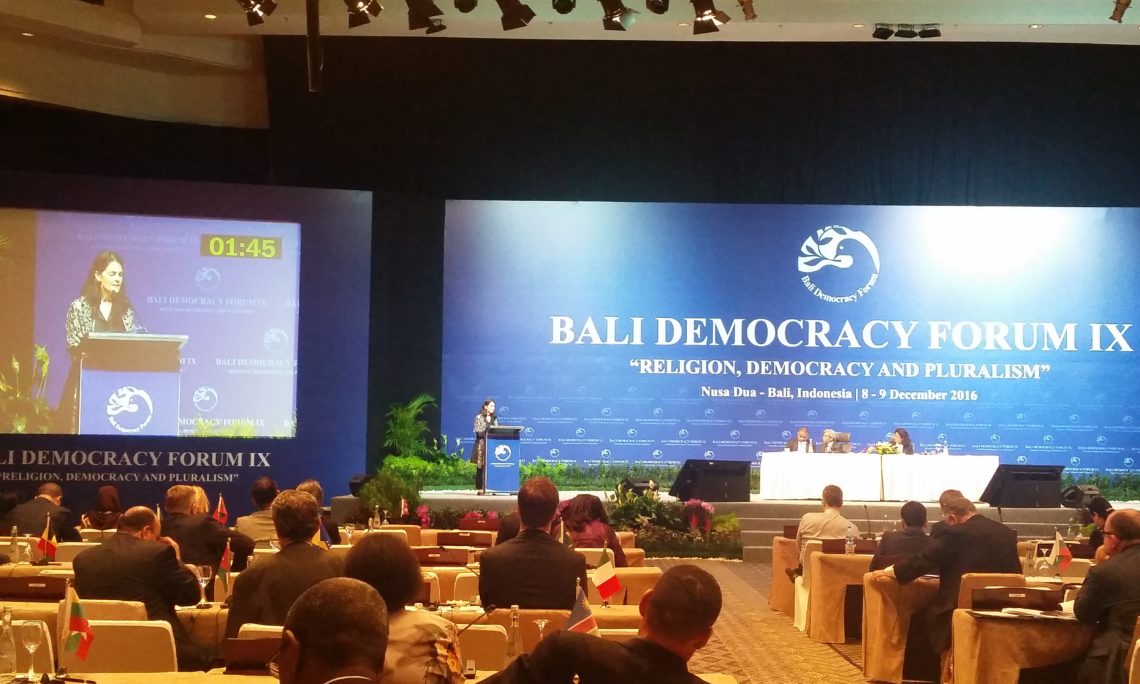 Mr. Vice Minister, esteemed delegates, let me begin by offering my thanks to Indonesia. Sincerest thanks to the Minister for this opportunity and please accept our deepest condolences for the losses in Aceh. The United States commends the Government of Indonesia for its leadership in convening its ninth Bali Democracy Forum, which continues to spark important dialogue about democracy promotion around the world.

We especially welcome the Forum’s theme of “Religion, Pluralism, and Democracy.” The right to express freely one’s thought, conscience, and religion are fundamental human rights and bedrock American principles. Promoting these freedoms has been essential for building our pluralistic society and crucial in ensuring that our democracy thrives. As we know, maintaining an active democracy requires ongoing effort to alleviate tensions among groups of different faiths and ensure that all voices are heard. But societies are more stable and more united when their citizens are able to practice their faiths without coercion or fear. Without the promotion of religious freedom, without tolerance, there can be neither genuine democracy nor lasting security for any country. We welcome opportunities like this Forum to explore the challenges of pluralism, and share best practices for strengthening our democracies.

As the U.S. Ambassador to ASEAN, it has been wonderful to witness the diverse range of cultures and religions throughout Southeast Asia, and I have been inspired by the important role religion plays in daily life. If ASEAN were a country, it would be home to the largest number of Muslims, the second largest number of Buddhists, and third largest number of Christians in the world. The United States believes it is the role of government to protect its population from religious discrimination and to establish an environment, through both law and leadership, that enables members of all faiths to live without fear of persecution.

Unfortunately, in far too many countries, governments either have a mixed record or have failed in this task, sometimes through inaction. Protecting religious freedom and promoting pluralism not only enables individuals to exercise a human right, but serves as a driver of peace, security, and development. By actively seeking religious tolerance, we also help counter extremism, ease sectarian strains, and share economic prosperity.

To achieve this, the United States has developed initiatives both overseas and domestically, at the national and local levels, to enlarge the democratic space for religious expression.

Within the U.S. Department of State, the Secretary of State’s Office for Religion and Global Affairs partners with governments and religious communities globally in pursuit of joint projects across religious and sectarian lines. A recent example of this is the establishment of the U.S.-Indonesia Council on Religion and Pluralism in August of this year. This civil society-led entity, with the support of President Obama and President Jokowi, convenes religious leaders from across faith traditions to increase religious understanding, mutual respect, and collaboration. In fact, some members of this Council joined in the civil society events preceding this Forum. Through their example we see that civil society leadership is essential for building mutual understanding, improving religious education, and countering efforts to politicize and distort religion.

In addition, through the State Department’s Office of International Religious Freedom, the United States works with other governments, civil society, and religious leaders around the globe to eradicate the root causes of intolerance, increase public awareness of religious freedom issues, support training on the legal and policy protections for religious freedom, and empower religious minorities to participate in political processes.

We also see the value of religious tolerance emulated at local levels in the United States. In Boston, Los Angeles, and cities across the U.S., law enforcement regularly partners with leaders across all religions to build trust between citizens and government. This in turn both strengthens the community and protects them through community policing.

Americans themselves are also actively involved in promoting tolerance. For example, an extremely successful American yoghurt company, founded by an immigrant, has taken a stand to employ refugees in our country, no matter their belief system. When his policies were criticized, his yoghurt enjoyed a groundswell of consumer support.

That is not to say, however, that these challenges are behind us or that we have it all figured out. Tensions will inevitably still arise when a democracy seeks to ensure all faiths have a voice. But when members of all faiths are assured of their fundamental rights to practice their religion, to speak freely, to gather freely, those guarantees give hope and an outlet to groups who might feel marginalized. And therefore, disagreements are easier to address.

The international community must remain united, resolved and vigilant in promoting religious freedom, fostering inter-faith harmony, and creating harmonious pluralistic societies. We also have a shared obligation to counter discrimination and actions that threaten our fundamental freedoms and democratic values.

Thank you to Indonesia and all the delegations for our conversation today.