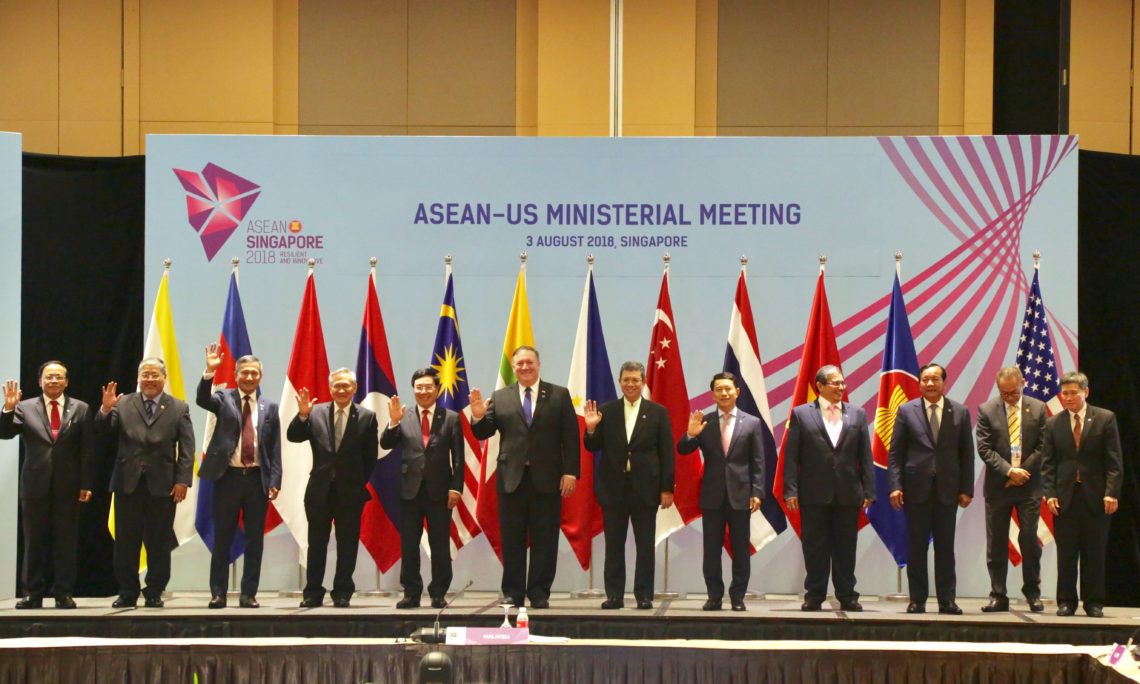 SECRETARY POMPEO: Thank you. Thank you, Mr. Minister. It’s an honor to co-chair this ministerial meeting with you. It’s my first meeting as well. I’m delighted to participate in this first engagement here with U.S.-ASEAN, and it’s great to be back in Singapore.

I would like to thank you, Foreign Minister Balakrishnan, for Singapore’s warm welcome, both here and back in June, and for its leadership as this year’s ASEAN chair.

On behalf of the United States, let me also offer my condolences to the people of Laos for the loss of life and devastation caused by the dam breach. The U.S. Government is providing assistance to respond to this disaster, and we welcome the support already provided by the ASEAN Humanitarian Assistance Center. I would also like to express my condolences to Indonesia, where a powerful earthquake struck; and to Myanmar, for the casualties suffered in recent flooding and landslides.

Last year, we celebrated ASEAN’s 50th anniversary, as well as 40 years of U.S.-ASEAN relations. We look forward to broadening and deepening our Strategic Partnership.

Over the first year and a half of this administration, President Trump attended his first U.S.-ASEAN Summit and the East Asia Summit in Manila; Vice President Pence visited the ASEAN Secretariat; and numerous cabinet secretaries traveled to the region, including my own recent travel to Vietnam. I expect and am eager for this frequent engagement to continue.

Our economic engagement has created hundreds of thousands of jobs on both sides of the Pacific. ASEAN is the number one destination for U.S. investment in Asia and ASEAN member-states have increased their investment into the United States by over 1,300 percent between 2004 and 2016. Our policy cooperation on issues like ICT, energy, transportation, and agriculture is also developing rapidly.

On security, we appreciate ASEAN’s ongoing efforts to promote peace and stability in the region, support the rule of law in the South China Sea, and to strictly enforce sanctions on North Korea. We are also working with ASEAN member-states to counter the threat of terrorism and violent extremism in the region.

In terms of ASEAN’s socio-cultural issues, we are building capacity among ASEAN’s youth, building opportunities for women, and working to improve disaster response and promote a healthy marine ecosystem. Our cooperation to jointly address cybersecurity challenges has also expanded, and we appreciated ASEAN’s leaders’ first-ever cyber statement in April.

Again, Mr. Minister, ASEAN colleagues, it’s a great pleasure to be with you here today. I look forward to our discussions and to hearing your thoughts on how the United States and ASEAN can strengthen our ties. Thank you, Mr. Minister.

"The United States is a Pacific nation, and we remain committed to ASEAN centrality under our Indo-Pacific strategy." — Secretary Pompeo Remarks at the U.S.-ASEAN Ministerial in Singapore 🇸🇬. Read more: https://go.usa.gov/xUGQH