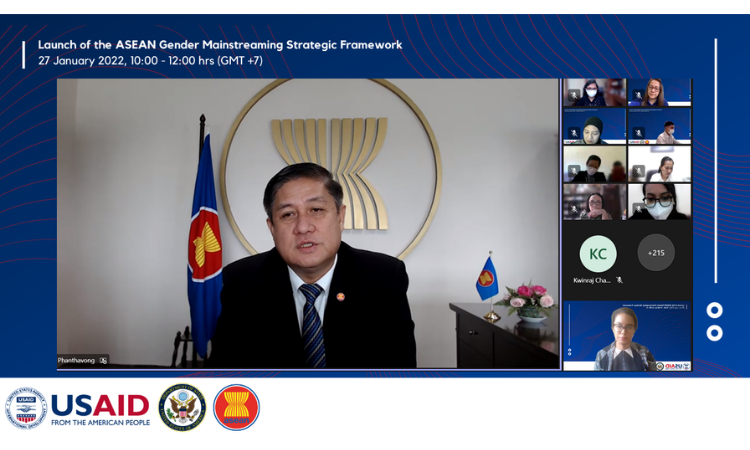 Jakarta, INDONESIA, January 27, 2022 – The Association of Southeast Asian Nations (ASEAN) launched the ASEAN Gender Mainstreaming Strategic Framework. Led jointly by the ASEAN Committee on Women (ACW) and the ASEAN Commission on the Promotion and Protection of the Rights of Women and Children (ACWC), with support from the U.S. Agency for International Development (USAID), the Strategic Framework proposes an implementation approach to advance ASEAN’s gender equality commitments.

“Firmly grounded in the region’s current context and capabilities and the commitments set out in the 2017 Declaration on the Gender-Responsive Implementation of the ASEAN Community Vision 2025 and Sustainable Development Goals, the ASEAN Gender Mainstreaming Strategic Framework establishes concrete steps for a whole-of-ASEAN approach to lay the groundwork for longer-term structural changes. These in turn ensure that every political, economic, and societal issue of the ASEAN Community is strategically addressed with gender equity in mind,” remarked H.E. Ekkaphab Phanthavong, Deputy Secretary-General for ASEAN Socio-Cultural Community.

“The Strategic Framework’s goals, approach, and activities seek to put into place the essential building blocks so that gender equality and inclusion are fully integrated in ASEAN’s current work as well as in envisioning the ASEAN Community post-2025,” emphasized H.E. Lenny N. Rosalin, Deputy Minister for Gender Equality, Ministry of Women’s Empowerment and Child Protection, Indonesia, as ACW Chair.

“The ACW reaffirms its commitment to forge ahead with gender mainstreaming together with ACWC and other key sectoral bodies, partners and stakeholders through the implementation of the ACW Work Plan 2021-2025 with gender equality and inclusion at the front stage and center of its implementation,” added H.E. Rosalin.

Ms. Jennifer Klein, the Executive Director and Co-chair of the new White House Gender Policy Council, underscored the Framework’s timeliness, “Today’s launch of the ASEAN Gender Mainstreaming Strategic Framework marks the culmination of years of effort on the part of ASEAN and the United States to move from gender policy commitments to implementation and meaningful integration of gender equality across the ASEAN community. The pandemic has laid bare the persistent structural inequities that remain despite decades of investment and progress… the ASEAN Gender Mainstreaming Strategic Framework could not have come at a more critical time.”

Ms. Klein commended ASEAN on the finalization of the Framework and encouraged continued attention and collaboration, citing the United States’ ongoing work with ASEAN to advance gender equality and mainstreaming through capacity building, women’s leadership and entrepreneurship initiatives, as well as the Women, Peace and Security agenda.

The virtual launch convened over 280 representatives from across the ASEAN Political-Security, Economic, and Socio-Cultural pillars, the U.S. government, UN Women, and other Dialogue and Development Partners.  Stakeholders shared ongoing or planned gender mainstreaming initiatives and agreed to prioritize broadening awareness of the Strategic Framework and implementing recommendations, which include establishing gender mainstreaming institutional mechanisms, enhancing gender-responsive senior leadership, and securing the necessary capacity and resources.