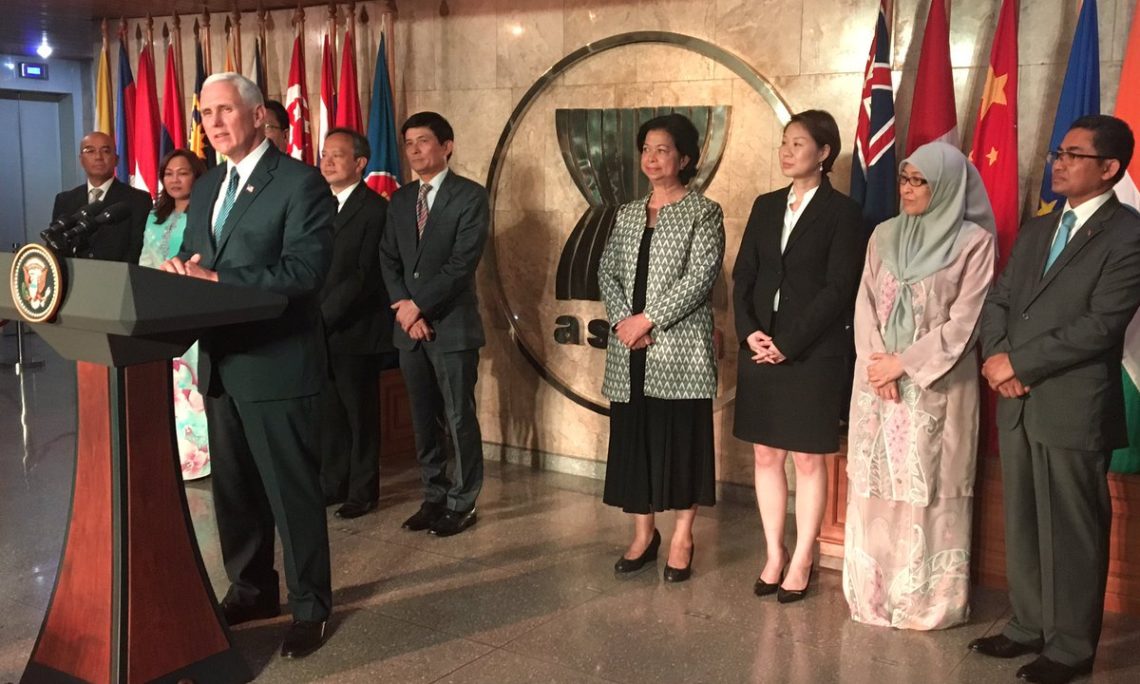 Remarks by the Vice President at ASEAN

And it is such an honor to be here today at ASEAN, the Association of Southeast Asian Nations. Since 1967, ASEAN has fostered friendship and economic integration between its members. It’s helped forge regional cooperation to tackle common challenges. It’s promoted prosperity and security — not just for ASEAN and its members, but for the Asia Pacific as a whole.

I want to thank the chargé d’affaires, Jane Bocklage, for that kind introduction. Thank you for faithfully representing the United States of America to ASEAN. The President and I are grateful for your work.

I also want to thank Secretary General Minh and Chairwoman Buensuceso and the ASEAN permanent members who are here with me today.

I was grateful to have the opportunity to meet with each of you today and appreciate our discussion about our shared values and shared opportunities.

I spoke to President Trump this morning, and he gave me the great privilege to inform the Secretary General and the permanent members of ASEAN that the President of the United States will attend the U.S.-ASEAN Summit, the East Asia Summit, and the APEC Leaders Meeting in Vietnam and the Philippines this November. (Applause.)

The President asked me to deliver this message directly to the leadership here at ASEAN and to express how enthusiastic he is to join the U.S.-ASEAN Summit during the golden anniversary year of this organization.

It is a testament to the value that President Trump places on the U.S.-ASEAN strategic partnership and the Asia Pacific as a whole. And it’s a sign, I hope, to all of our firm and unwavering commitment to build on the strong foundation that we already share.

Now to protect that prosperity and to ensure our continued growth, the United States will redouble our cooperation with ASEAN on issues of regional security. The menace and the reality of global terrorism threatens all our nations. And under President Trump, we will continue to support increasing information sharing and security efforts to protect our people and our way of life across this region and across the wider world.

We’ll continue to work closely with ASEAN to promote peace and stability in the South China Sea by upholding a rules-based order, ensuring the lawful and unimpeded flow of commerce, and encouraging the peaceful and diplomatic resolution of disputes. For 40 years, the United States has worked side by side with ASEAN to foster peace and prosperity on these seas and between our lands; and President Trump and I are confident that through our continued partnership, which even now, today, is growing stronger, together we will build on our firm foundation to reach even greater heights in the next 50 years of this great organization.

So I want to say thank you. Thank you to the permanent members, thank you to the Secretary General for the warm hospitality today. President Trump and I look forward to reaffirming our commitment to each of you in the days ahead, and I know he looks forward to seeing you all at the summits this November.

Thank you very much for giving me the opportunity to make this announcement. It is an honor to be with you all. (Applause.)