Regional Inter-Sectoral Workshop on the Renewal of the ASEAN Roadmap for the Elimination of the Worst Forms
of Child Labour by 2025
By U.S. Mission to ASEAN
5 MINUTE READ 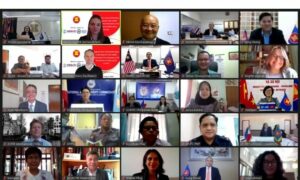 Over 60 million children in Asia and the Pacific undertake work that is likely to harm their development and jeopardize their education. The United States (U.S.) Government – through the U.S. Agency for International Development (USAID), is supporting the Association of South East Asian Nations (ASEAN) eliminate the worst forms of child labor in the region. These renewed efforts center on building upon achievements and lessons learned from the implementation of the ASEAN Roadmap for the Elimination of the Worst Forms of Child Labour by 2016.

To launch the new initiative, on August 26th, 2020, USAID, through the ASEAN-USAID Partnership for Regional Optimization, within the Political-Security and Socio-Cultural Communities (PROSPECT) project, – also working closely with the ASEAN Secretariat’s Labor and Civil Service Division and the International Labor Organization (ILO) – provided the ASEAN’s Senior Labor Officials Meeting (SLOM) with a platform through which to renew its commitment to eradicating child labor in the region. The revised ASEAN Roadmap for the Elimination of the Worst Forms of Child Labour by 2025, drafted with support from ILO, provides a region-wide, inter-sectoral framework for cooperation that reinforces ongoing national-level efforts and global commitments of ASEAN Member States (AMS) to fight child labor under Target 8.7 of the Uinted Nations’ Sustainable Development Goals. The Roadmap was endorsed by the SLOM on August 25th, 2020, one day prior to the workshop.

Over the course of two half-days, expert-led sessions provided an opportunity for over 75 participants from AMS governments, as well as distinguished regional experts and practitioners from the ILO and the private sector, to exchange best practices and address challenges for tackling this critical cross-cutting issue. A primary accomplishment of the workshop focused on how the Roadmap outcomes are applicable at the national level to determine next step strategies for designing AMS implementation agendas and progress monitoring indicator frameworks.

In his welcoming remarks, H.E. Kung Phoak, Deputy Secretary-General of ASEAN Socio-Cultural Community, noted that child labor practices cannot be eliminated by law enforcement alone, but through cooperation among a broad group of stakeholders such as those represented in the workshop. He went on to express his appreciation for “the immense support by relevant sectoral bodies in the development of the background paper and the new Roadmap and its recent endorsement by SLOM.”

Building upon this in his opening remarks, Mr. Ryan Washburn, USAID Principal Officer to ASEAN, expressed the United States’ shared “zero-tolerance” policy for child labor. He went on to “congratulate ASEAN for its allegiance to ensure that ASEAN Member States are on track with progress towards the elimination of child labor through the implementation of the renewed Roadmap.”

Moving forward, through USAID’s PROSPECT project, the United States will continue to seek ways to reaffirm a zero-tolerance policy on child labor and support ASEAN efforts to eliminate the worst forms of child labor in the region.