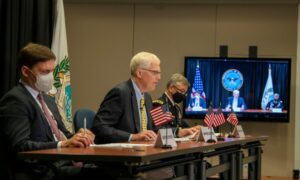 In those fora, he and regional counterparts discussed mutual security challenges including maritime security, stability in the Mekong region, terrorism, the Democratic People’s Republic of Korea, and the need to uphold international rules and norms.

The Acting Secretary emphasized that the Indo-Pacific region remains the U.S. Department of Defense’s priority theater.  He stressed the United States’ commitment to a free and open region, which reflects the values, history and economic ties we share with our ASEAN allies and partners.  He highlighted the United States’ belief in multilateral approaches to advance shared principles, pursue common goals and promote security and prosperity for all.  He also shared how the U.S. has supported ASEAN nations with COVID-19 relief and offered further partnership on this issue in the future.

Acting Secretary Miller commended Vietnam’s leadership as the ADMM-Plus Chair during an unpredictable and exceptionally difficult year, and he applauded ASEAN’s show of unity.  Finally, the Acting Secretary offered U.S. support to Brunei during its upcoming chairmanship.