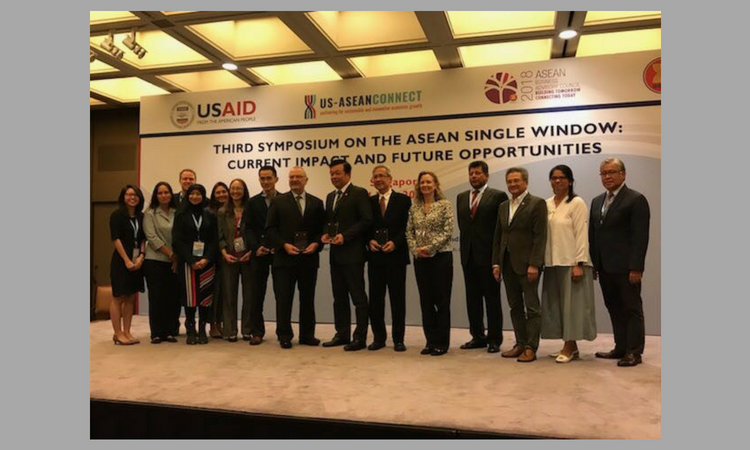 SINGAPORE, June 4, 2018 – The Association of Southeast Asian Nations (ASEAN), with support from the U.S. Agency for International Development and the ASEAN Business Advisory Council, brought together officials from ASEAN Member States, representatives of the private sector, and officials of foreign governments to review progress in implementing the ASEAN Single Window and map the future of this trade facilitation tool.  The event also celebrated 10 years of cooperation between the United States and ASEAN in building and launching the ASW to streamline the electronic submission process for cargo clearance enabled by the single window program.

“Finding new ways to generate and utilize ASW as trade facilitation tool and leveraging its potential are key next steps we must take,” saidthe Deputy Secretary-General of ASEAN for ASEAN Economic Community Dr. Aladdin Rillo in his opening remarks. “I believe if we all join our experiences, competencies and forces, we can make a real contribution to further improve the ASW platform.”

The ASEAN Single Window is a regional platform that allows for the electronic exchange of trade information, between traders and governments and between exporting and importing countries, that expedites the cargo clearance process, reduces cost and time of doing business, and enhances trade efficiency and competitiveness.

“The U.S. Government is proud that it has been able to support ASEAN in these activities.  It has been a long road but one that has helped cement U.S.-ASEAN cooperation,” said U.S. Mission to ASEAN Chargé d’affaires Jane Bocklage.  “Today’s discussion launched a conversation on  the next steps for ASW. This conversation must be a continuous process of dialogue on what works and what doesn’t.  And through this dialogue, a new plan can be developed that will help guide trade facilitation efforts for years to come.”

At the Symposium, Mr. Robert Thommen, U.S. Customs and Border Protection Attaché, expressed the interest of the United States in launching an effort to exchange [describe what CBP is proposing] with ASEAN through a connection between the ASW and the United States’ single window known as the Automated Commercial Environment or ACE for short.

In January 2018, Indonesia, Malaysia, Singapore, Thailand and Vietnam began using the ASW to exchange certificates of origin, cutting out a manual process that often took days.  Those countries are exchanging around 25,000 documents a month through the ASW. Brunei Darussalam, Cambodia, and the Philippines are now poised to join the first five in the next few months.  Myanmar and Lao will follow thereafter.  ASEAN plans to exchange various sanitary and phytosanitary certificates by early 2019, further facilitating trade in the region.

The symposium was attended by more than 100 participants that included government officials, private sector, and trading community representatives from all Member States.