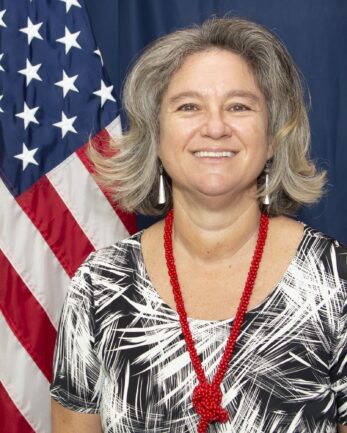 A career Senior Foreign Service Officer, Rachel has focused for more than 20 years on building U.S. relationships in Asia and the Pacific.  Most recently Rachel was the Acting Deputy Chief of Mission and the Public Affairs Counselor at the U.S. Mission to Indonesia.  Rachel also led the U.S. Consulate General in Perth, Australia, and before that was on the Southeast Asia policy leadership team in Washington, DC.  She spent two years in Afghanistan developing educational opportunities and engaging with the media, and another two years leading joint civilian-military training.  Rachel has also served in Malaysia, Tajikistan, and Kyrgyzstan, where she was Acting Public Affairs Officer during both the 2005 and 2010 revolutions.

Prior to joining the Foreign Service Rachel worked for the Environmental Protection Agency and for NASA.  She was also a Peace Corps volunteer in Thailand teaching fish farming.  Rachel has a B.S. in Marine Biology, and Master degrees in Environmental Management and Public Policy from Indiana University.