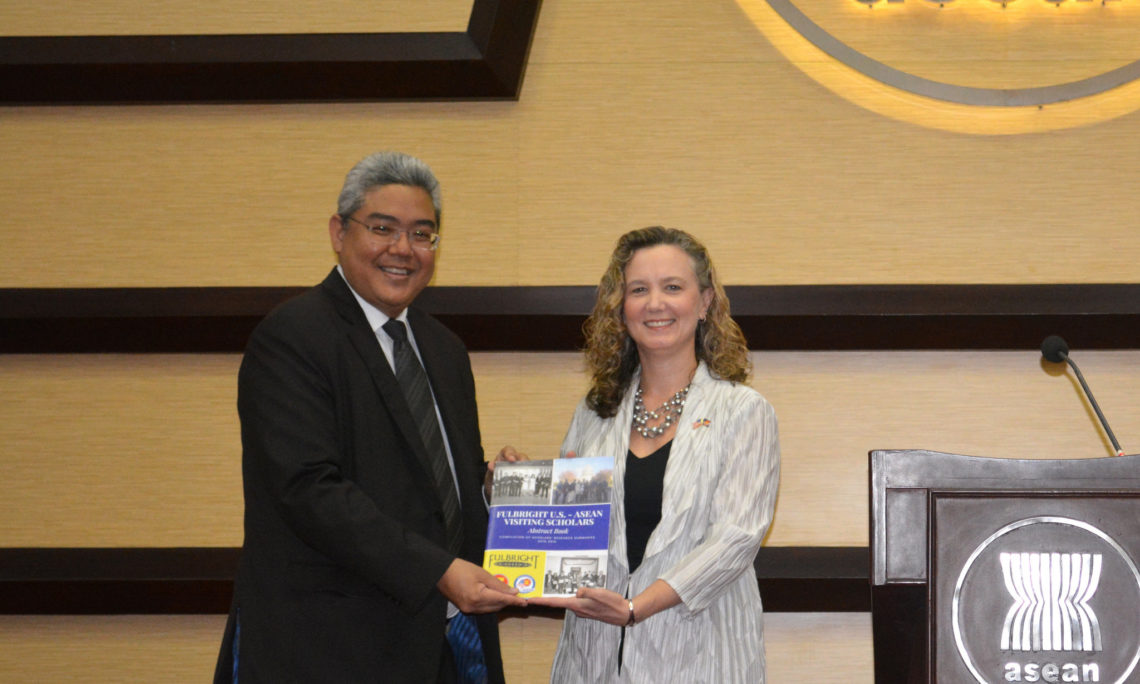 Thank you DSG Vongthep for welcoming us to the ASEAN Secretariat and for providing the space for this workshop.

Good morning everyone; and to our Fulbright scholars and alumni from outside Jakarta – welcome to Jakarta!

2017 is a special year because not only does it mark ASEAN’s 50th birthday, but it is also the 40th anniversary of the United States’ engagement with ASEAN as a Dialogue Partner. Our relationship, without a doubt, has benefited both ASEAN and the United States: diplomatically, economically, from a national security standpoint, and by enriching our communities through strong personal ties. Programs like Fulbright and the Young Southeast Asian Leaders Initiative build enduring people-to-people ties. In April, Vice President Pence met with ASEAN Permanent Representatives and the ASEAN Secretary General right here in this building, and announced that President Trump will travel to Manila for the U.S.-ASEAN and East Asia Summits later this year. This is a testament to the value the United States places on our partnership with ASEAN and, as a Pacific nation, our engagement with the broader Asia-Pacific region.

This year also marks the fifth year of the Fulbright U.S. – ASEAN Visiting Scholars Program. Since its inception, the program has sent almost 40 scholars to the United States. We continue to partner closely with ASEAN to further our mutual goal of a people-centered region. This year, we will send ten scholars to the United States to do research at U.S. universities on a wide range of subjects including education, health, finance, political security, environment, and art. Moreover, we will also send five U.S. scholars to the ASEAN region, as part of a new program, the Fulbright ASEAN Research Program for U.S. Scholars. The grant allows American scholars to conduct collaborative research in their area of specialization on an issue of priority to ASEAN – or to the U.S.–ASEAN relationship – in up to three of the ten ASEAN Member States.

Fulbright U.S. – ASEAN Visiting Scholars have worked on critical research topics and made notable findings. One example is the 2014 scholar from Vietnam, Mrs. Ngan Ha To. During her Fulbright study at Boston University, she set up a Wikispace-based resource for teachers at her home institution of Hanoi University, where she shared information about her action research in English language teaching. Currently, she is leading the university’s project on delivering action research courses to teachers in Vietnam’s northern provinces. At the same time, she is developing teacher training programs in one of the most credible English language centers in Hanoi.

Another example is Mr. Sokha Kheam, our 2016 scholar from Cambodia. Following his three-month research at Texas State University, he shared the knowledge and skills he gained in the area of co-teaching with two general biology laboratories in Cambodia. He is currently designing the biology education curriculum for undergraduate students in Cambodia.

Both Mrs. Ngan and Mr. Sokha are here with us today, as well as eight other Fulbright alumni who also have done significant research in the United States. In this workshop, we have brought our new scholars together with our alumni to help build connections. We hope that our alumni can share their experience and success stories at the small group discussion later today. By the end of this year, the 2017 Fulbright U.S. – ASEAN Visiting Scholars will become Fulbright alumni themselves; I cannot wait to hear the outcomes of their research. To our 2017 scholars: I encourage you to develop a regional approach in your research and to share your insights with us after you return from the United States.

Now, to show our appreciation for the Fulbright scholars’ contributions to their communities and to ASEAN, we proudly present the Fulbright U.S. – ASEAN Visiting Scholars’ Abstract Book. I would like to thank Ms. Abigail Lanceta from ASEAN Secretariat’s Education, Youth and Sports Division for coming up with the initial idea behind this book. I would also like to thank all of the 2013-2016 scholars for sharing their research findings. This book is a compilation of all the research abstracts and findings of the Fulbright U.S. – ASEAN Visiting Scholars. It will be publicly available on the U.S. Mission to ASEAN’s website, as well as the ASEAN Secretariat’s Resource Center.

In conclusion, I want to thank the ASEAN Secretariat – especially the Education, Youth and Sports Division – for their collaboration; not only in today’s event, but also in developing and promoting the Fulbright U.S.-ASEAN Visiting Scholars Initiative. To our new scholars: we wish you each a productive and exciting experience, and look forward to hearing from you during your journey and beyond.

Now, I would like to kindly invite DSG Vongthep back to the stage, so we can officially launch the Fulbright U.S. – ASEAN Visiting Scholars’ Abstract Book together.