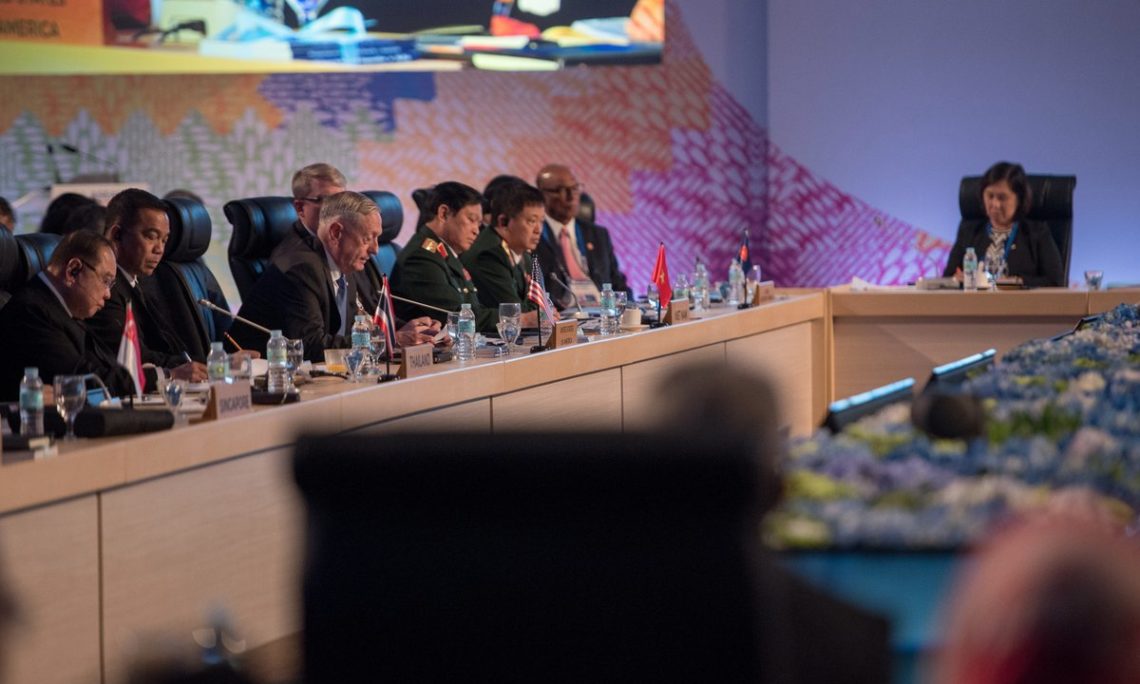 CAPT JEFF DAVIS: This is the first of a few chances you’ll get to talk to the Secretary. Let’s just say this will be the first opportunity you’ll have to talk to him on the trip.

SECRETARY OF DEFENSE JIM MATTIS: I’m ok? Thank you for coming on the trip. It’s a long one of course. Long way. We are going to bounce (inaudible). We are on our way as you know to the Philippines.

We will be participating, my party and I in the ASEAN defense ministers’ meeting. It will be an opportunity to recognize ASEAN now for 50 years of promoting peace and stability in the region. They have done a very good job of it. Nations coming of age, many years finding, finding, basically a foundation where they can discuss things.

And it also marks 40 years of friendship and cooperation between ASEAN and the United States.

ASEAN provides an international venue, giving voice to those who want relations between states to be based on respect, not on predatory economics or on the size of militaries.

ASEAN nations have demonstrated that they can listen to one another, they identify opportunities to increase defense cooperation for their own security, and seek shared solutions to shared concerns.

I will also have meetings while I’m in the Philippines at the ASEAN meeting with regional counterparts: Japan, the Republic of Korea, Philippines of course, India, Indonesia, and Malaysia.

When we leave the Philippines we will be going to Thailand where I will be honored to lead the US presidential delegation to pay respects and express condolences on behalf of the American people by attending the royal cremation rites for his majesty, the late king.

He was a real champion of the Thai people, leader in terms of personal integrity, admired by all who came in contact. A dignified leader as well. He was understandably beloved by his people and proponent of our strong Thailand-United States relationship.

From Thailand I will go to South Korea to co-chair the 49TH annual Security Consultative Meeting alongside ROK Minister of Defense Song.
There, we will underscore our ironclad commitment to each other.

We will discuss the global threat from DPRK (inaudible) recognized in the United Nations Security Council – two unanimous Security Council resolutions as a result of firing missiles over Japan and nuclear test.

We will be talking about how we reinforce the diplomatic efforts for the (inaudible) campaign to return to a denuclearized Korean peninsula.
And also how we are going to maintain peace by keeping our militaries alert while our diplomats – Japanese, South Korean and U.S. – work with all nations to denuclearize the Korean peninsula.

That in a nutshell is how we are going to go on the trip. Philippines, ASEAN, and a lot of other people (inaudible). Go over to Thailand to pay our respects, and move on to Korea. While at ASEAN, by the way we will have a trilateral meeting with the ROK, United States and Japan where we will discuss things in a trilateral setting. For obvious reasons (inaudible). So that’s all (inaudible).

Q: One question on the record about the trilat. Just about the trilat, since you’ve mentioned it? Is there a message that you think a trilat sends to DPRK and is there something you would like to underscore or ask of your partners, South Korea and Japan?

SECRETARY MATTIS: The trilat, as it has for years, demonstrates the unity of these three democracies as we work together to keep the peace and the continued efforts along those lines.

Q: And the message to DPRK?

SECRETARY MATTIS: DPRK, the message is the same one as China, Russia, France, the United States, and all the international community has been directing, to denuclearize the Korean peninsula. There is only one country with nuclear weapons on the Korean peninsula. The U.N. Security Council unanimous resolution gives a pretty good idea how the international community looks at it.