JOINT STATEMENT OF THE ASEAN-U.S. MINISTERIAL DIALOGUE ON GENDER EQUALITY AND WOMEN’S EMPOWERMENT 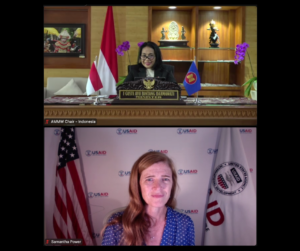 The inaugural ASEAN-U.S. Ministerial Dialogue on Gender Equality and Women’s Empowerment was held on 29 September 2022 via video conference to demonstrate our unwavering commitment to promote gender equality and the empowerment of all women and girls in Southeast Asia. The Dialogue was co-chaired by Indonesia as Chair of the ASEAN Ministerial Meeting on Women (AMMW) and the United States, and attended by ASEAN Member States and representatives from the United States.
UPHOLDING the commitments in the ASEAN-U.S. 2022 Special Summit Joint Vision Statement, and the Plan of Action to Implement the ASEAN-United States Strategic Partnership (2021-2025), which took into account the Joint Statement on the 2015 ASEAN-U.S. Strategic Partnership, to empower all women and girls and promote gender equity through enhanced engagement in ASEAN-led mechanisms, including the commitment to strengthen cooperation in gender equality initiatives through technical assistance in promoting gender mainstreaming, women’s empowerment, and care and protection of vulnerable groups;
RECOGNISING that ASEAN and the United States understand the critical importance of integrating attention to gender equality and women’s empowerment in policy frameworks, strategies and work plans, as well as in various levels of governance, in order to advance inclusive and sustainable development;
REAFFIRMING our support for the international rules-based order in which respect for sovereignty and territorial integrity are paramount principles to support women participating fully in the labour force;
UNDERSCORING the need to address and eliminate gender-based violence (GBV) against women and girls,as such violence undermines individuals’ safety, health, well-being, economic potential, and human rights, and that this is a particularly critical area of focus in light of increasing reports of GBV as a result of the COVID-19 pandemic and the climate crisis; and that GBV, and particularly violence against all women and girls, undermines progress across all three pillars of the ASEAN Community;
HIGHLIGHTING that both ASEAN and the United States are committed to addressing and eliminating GBVagainst women and girls; in ASEAN, this is demonstrated through the ASEAN Regional Plan of Action on the Elimination of Violence against W omen; the 2021 Mid-term Review of the ASEAN Regional Plan of Actionon the Elimination of Violence against Women; the ASEAN Plan of Action against Trafficking in Persons, Especially Women and Children (2015); and the ASEAN Multi-Sectoral Work Plan (2016); and in the United States, this is demonstrated by a strengthened Violence Against Women Act; the Strategic Priority to Eliminate Gender-Based Violence, which includes the disproportionate risks to the health, safety and economic security of all women and girls posed by climate change, in the United States National Strategy on Gender Equity and Equality; the forthcoming release of the first-ever U.S. domestic National Action Plan to End GBV; the forthcoming update to the U.S. Strategy to Prevent and Respond to GBV Globally; as well as related strategies and policies on Women, Peace and Security (WPS), and on trafficking in persons;
UNDERSCORING the need to strengthen women’s economic security and labour force participation across the ASEAN region including through addressing gender inequalities in resource access and supplychains; pay and wealth gaps; recognition, reduction, redistribution, reward and representation of unpaid care work; economic disruptions caused by climate change; and access to other resources that promote entrepreneurship and market participation, while also acknowledging the COVID-19 pandemic’s disproportionate and long-term impact on women’s economic security and labour force participation, especially among those with greater risks and vulnerabilities;
REITERATING the need to promote a focus on women, peace, and security as a component of enhancing gender equality and regional security including by increasing ASEAN member states’ ability to respond to all security threats such as GBV against women and girls and conflict related to natural resource degradation and scarcity, food insecurity, and poverty related to impacts of climate change, by engaging women’s participation and leadership, and by addressing the insecurity they experience, including GBV and cross-border challenges;
MINDFUL of the linkage between furthering UNSCR 1325 on Women, Peace, and Security principles towards further realisation of ASEAN commitments to promote regional peace, stability, prosperity and sustainable development as outlined in the 2017 ASEAN Joint Statement on Promoting Women, Peace and Security (WPS) as well as the ASEAN Outlook on the Indo-Pacific; the ASEAN Charter; the ASEAN Community Vision 2025, and the ASEAN Socio-Cultural Community Blueprint 2025;
WE DO HEREBY: Resolve to undertake the following joint actions, considering the contexts, capacities and resources of ASEAN and the United States, to advance gender equality and the empowerment of all women and girls:

WE TASK the ASEAN Committee on Women (ACW) together with the relevant U.S. Government agencies to promote and implement the provisions of this joint statement in all its aspects, and to report to the ASEAN Ministerial Meeting on Women (AMMW) progress of implementation.

ADOPTED on 29 of September in the Year Two Thousand and Twenty-Two (2022).