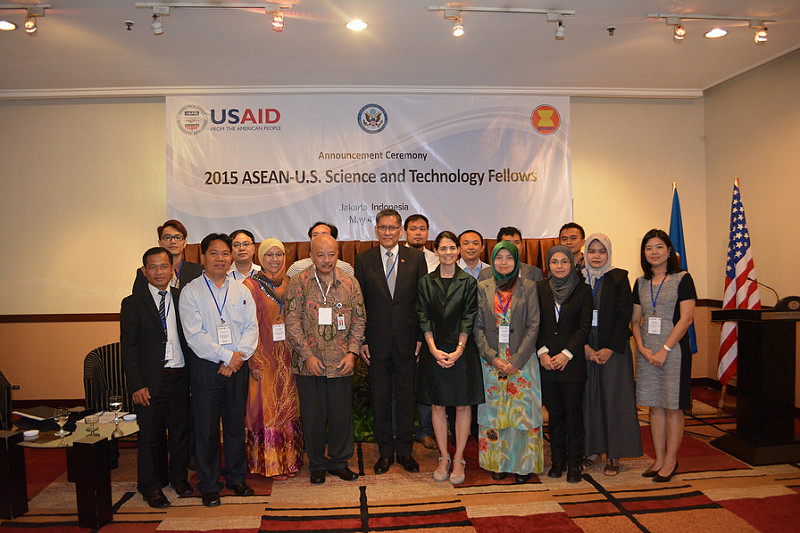 Ambassador Nina Hachigian with the 2015 ASEAN-U.S. Science and Technology Fellows

JAKARTA  –  The Association of Southeast Asian Nations (ASEAN) Committee on Science and Technology and the U.S. Mission to ASEAN today announced a second group of fellowships to ASEAN scientists to further drive policy debates and data-based decision making to address some of the region’s most challenging development issues.

“The ASEAN-U.S. Science and Technology Fellowship provides amazing opportunities for early career scientists who are ready to explore how to apply science for policy-making,”  said Nina Hachigian, U.S. Ambassador to ASEAN. “Science and technology are critical for solving policy problems, whether they have to do with domestic policy, foreign policy or development.”

“ASEAN Leaders will remain resolute in their Post-2015 vision to build upon and deepen the integration process, towards a more inclusive, cohesive and resilient ASEAN Community.  Interest remains high within ASEAN to strengthen and promote the use of best available science to influence policymaking in areas such as food and energy security, biodiversity, climate change, disaster management that are close to the hearts of the ASEAN peoples. Indeed, the ASEAN-US S&T Fellows Program can build capacity of scientists from the region to take a more prominent role in their respective country’s integration into the ASEAN Community,”said Larry Maramis, Director of the Cross-Sectoral Cooperation Directorate, ASEAN Secretariat, at a ceremony today in Jakarta.

Starting next week, the Fellows will be placed in host ministries in their own countries for one year to contribute their expertise in the fields of biodiversity, energy security and fisheries and coastal management. Driven by a passion to use science to benefit her community, one incoming fellow, Wiratni Budhijanto from Indonesia, said she is eager to learn “about the strategy and diplomacy techniques to make scientific considerations and ideas be heard more in the policy-making process.” Wiratni hopes the fellowship program will broaden her horizons by giving her the opportunity to meet people with different backgrounds and experiences.

During this week’s orientation, the 14 Fellows will brainstorm approaches to integrating science-based decision making into policy-making processes within their host ministries. They will also have an opportunity to meet the six outgoing pilot year Fellows who, over the past year, influenced public policy on water management, biodiversity conservation, disaster mitigation and bio-resource sharing.

“By learning and doing research, I was able to contribute to the scientific community, but by being involved in policy, I can contribute my knowledge to the wider public,” said outgoing Thai Fellow Honglada Thoetkiattikul. During her fellowship year, Honglada served on a taskforce to develop policy recommendations to encourage exchange of genetic resources among ASEAN Member States.

Over the course of the year, Fellows will continue to broaden their perspectives on ASEAN goals and objectives as well as have opportunities to strengthen their leadership skills. The long-term goal of the ASEAN-U.S. Science and Technology Fellows program is to create a network of scientists across ASEAN who will not only serve as champions for greater interaction between scientists and policy makers, but also contribute to the development of better policies, ones that positively impact the lives of ASEAN citizens. This approach is modeled after the AAAS Fellowship Program, which over the past 40 years has placed over 2,600 fellows in U.S. government agencies.

For more information about the ASEAN-U.S. Science and Technology Fellowship and the 2015-2016 Fellows, please visit: http://www.usaid.gov/asia-regional/asean-us-science-and-technology-fellows-program