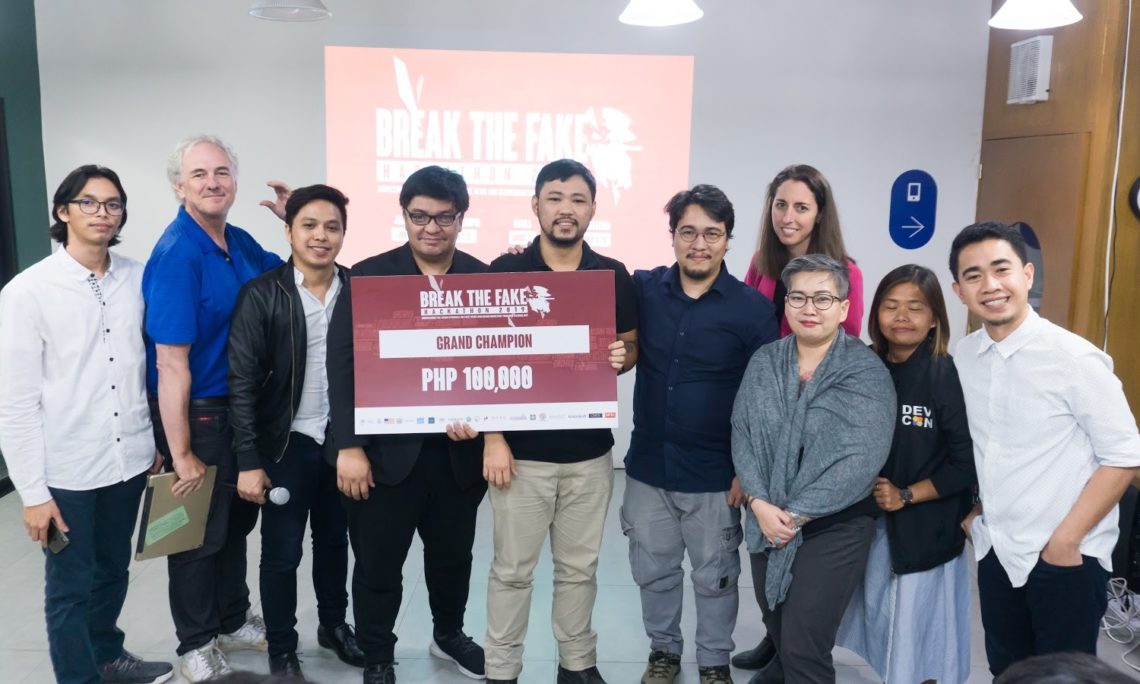 Manila, Philippines – Five or so years ago, “fake news” was a term that no one used. Today, it’s no longer just a term, but a phenomenon, recognized as an urgent global problem and a threat to human life by world leaders and institutions.

The rise of social media as the main source of news and information by most has made it easier for malicious figures and groups to spread false content, especially in tech-savvy Southeast Asia.

This led a group of independent youth leaders and professionals in Manila, Philippines to start the “Break the Fake Movement”, an organization that aims to engage the public, especially the youth, through technology-driven media literacy events to combat fake news.

“Fake news is one of the most pressing issues facing the world today. It will take the ingenuity of our youth, combined with the power of technology, to put an end to this trend. We wanted to give them a forum to realize their solutions and mobilize them into action,” said Gabriel Billones Jr., the Lead Organizer of Break the Fake Movement.

The event was held last September 14, 2019 at Solutions Space in Makati City. The grand winner received a total of Php100,000 worth of prizes. The winners are also given opportunities to pitch their programs to potential investors, visit the country offices of some of the region’s biggest companies, and get mentorship from local entrepreneurs and professionals, and consultancy from marketing and events management company, Ambidextr.

The champion of the Break the Fake Grand Hackathon is Team Troglodyte from the Philippines. ADMU, DLSU Manila, and UP Diliman graduates, Carlos Nazareno, Dominic Ligot, and Nikko Torcita, created this project that aims to create a system that maps networks of fake news websites spreading digital disinformation.

This is done through a network graph that visualizes and tracks information on fake news and disinformation websites, which are major vectors of digital disinformation and propaganda.

This network graph will be meant for viewing for the general public for general education and awareness, as well as for researchers and other parties actively combating disinformation as a tool for analysis via an interactive network map of the disinformation ecosystem.

Ligot, on the other hand, expressed that one of the problems is that people are not good at detecting fake news from real ones, they get carried away easily. He added that fake news sites are connected which could be determined by factors including common owners, same hosts, same webmaster, and upon receiving those data, they store and categorize it.

In addition to this, Torcita mentioned that they want it to be a tool that can be used by professionals and amateurs. They want to help journalists, researchers, fact-checkers, etc. They hope that with the database, a pattern could be revealed and preventive measures be made to weaken the activities of fake news websites.

The team plans to work on this project further by developing a Transparent Reputation Index for the database to lessen the people’s questions about the process of determining which news sites are fake, and to be able to determine that, there are several factors to consider such as if the news site has its own editorial team, if they have contact information, if they committed spelling and grammatical errors in their articles, etc.

With that having been said, the team is looking forward to seeing their work take off especially due to the fact that this is a positive contribution to the society. For them, it’s not about the prize, but to inspire the people to unite.

“The network graph proposed by Team Troglodyte is truly innovative. By mapping out the web of fake news sites – which have figurative and literal links to one another – we can also begin to separate these sources from legitimate outlets and publications. Separating the two will undoubtedly lift the quality of public discourse,” said Sofia Galve, a co-founder of Ambidextr, one of the partners for Break The Fake.

The other teams who competed during the Grand Hackathon was Team Free Wifi from Indonesia, who bagged 1st-Runner Up with their reference provider bot which aims to educate people to not directly believe any information that is sent to group chats, and lastly, Team Ambient from Malaysia who developed social media that runs on NEM blockchain platform, which is targeted to audiences that are more concerned with quality and bias-free content.

The event first made its stop in Jakarta, Indonesia in June and held the second outing in Kuala Lumpur, Malaysia in July. The Manila leg is the last stop of the event. Participants are encouraged to develop a multitude of possible solutions for fake news, including everything from an online database of fake news sites and an anti-fake news content portal to more niche solutions, like an app that identifies whether an applicant’s credentials are true or a mapping tool that maps traffic sources of a social sentiment in an online platform.

Devcon, an organization dedicated to professionalizing Filipino IT professionals, partnered with Break the Fake for the hackathon.

“Many people associate innovation with just websites and apps. But technology is so much more than that. Just as the previous generation of innovators has worked to keep our data, privacy, and identify safe from cybercriminals, the next will be tasked with ensuring the integrity of our news and information. We’re proud to encourage solutions in this endeavour,” said Devcon founder and president Winston Damarillo, who is a serial entrepreneur and  CEO of Amihan Global Strategies.

Co-founder of Break the Fake Movement, Gabriel Billones Jr., said that they were “pissed off” with the idea of fake news which brought about the movement where they conceived the software contest in November 2017 to gather talent from various countries to decode a common problem — the spread of fake news, especially now that it’s getting harder to distinguish false information online.

The Hackathon was made possible through the generous grant awarded by the Young Southeast Asian Leaders Initiative (YSEALI) Seeds for the Future program of the US government, in cooperation with Cultural Vistas. Launched in 2013, YSEALI is the signature program of the United States to strengthen youth leadership in the region.

The “Break the Fake Hackathon” was among the 21 winners of the small grants competition, where they received grants ranging from $4,000 to $15,000. The winners emerged as most deserving from the 400 applications the organization received in Southeast Asia.

For more information and updates, check the organization’s Facebook page at www.facebook.com/breakthefakeph.

Recognizing that over 65 percent of the population in Southeast Asia is under the age of 35, the White House launched the Young Southeast Asian Leaders Initiative (YSEALI) to augment leadership development and networking in the 10 ASEAN countries; deepen engagement with young leaders across critical sectors; and strengthen people-to-people ties between the United States and young leaders across the region.

The goal of YSEALI is to expand and institutionalize extensive programmatic engagement throughout Southeast Asia aimed at empowering the next generation of leaders.