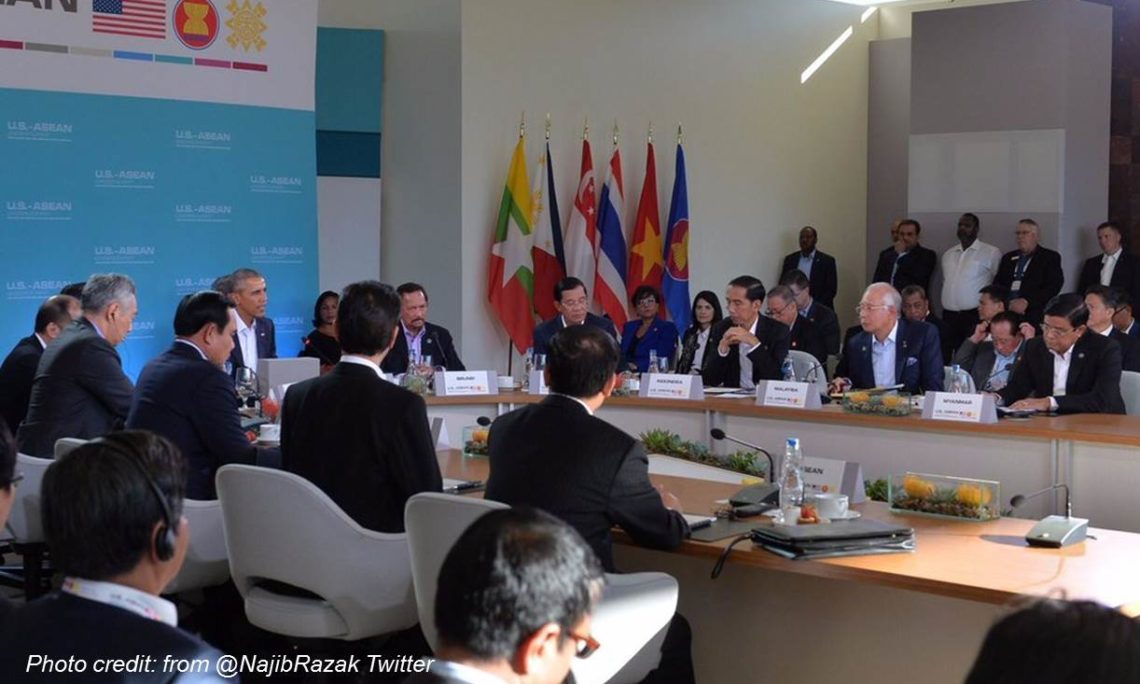 The White House
Office of the Press Secretary
For Immediate Release

Today, President Obama led the U.S. delegation to the U.S.–ASEAN Summit in Kuala Lumpur, Malaysia.  The United States and the Association of Southeast Asian Nations (ASEAN) have been partners for nearly 40 years, working together on shared goals of stability, prosperity, and peace in Southeast Asia.  The decision today to elevate this relationship to a strategic partnership marks a new era of even stronger cooperation.  The United States is committed to this partnership for the long run and continues to deepen and broaden engagement with ASEAN and its individual member states.  The ASEAN-U.S. Plan of Action 2016–2020, which the leaders endorsed at the Summit, is a symbol of this mutual commitment.  The United States supports ASEAN’s central role in many of the region’s key institutions and works closely with ASEAN to strengthen Asia’s regional architecture.

The United States and ASEAN have jointly undertaken a variety of activities and programs, including support for the ASEAN Economic Community and programs to strengthen people-to-people ties, like the Young Southeast Asian Leaders Initiative.  U.S.-ASEAN cooperation is also supporting sustainable growth and a strengthened rules-based system so that countries can work together to address regional challenges like climate change, human trafficking, and maritime security.

The United States has five priority areas for engagement with ASEAN across its economic, political, and socio-cultural pillars.

The United States and ASEAN traded $254 billion in two-way goods and services, and U.S. FDI in Southeast Asia totaled $226 billion (stock) in 2014, the largest of any nation.  Under the U.S.-ASEAN Trade and Investment Framework Agreement and the Expanded Economic Engagement Initiative, we are expanding these ties between the United States and ASEAN and creating business opportunities and new jobs for both parties.  This year, we launched a series of workshops under the U.S.-ASEAN Trade and Environment Dialogue to promote mutually supportive policies.

The United States is working with ASEAN Member States to realize the vision of the ASEAN Economic Community (AEC), as part of the larger ASEAN Community.  The AEC will expand the free movement of goods, services, labor, and capital among ASEAN member states.  The United States is committed to supporting this effort by providing assistance in areas including trade facilitation, standards harmonization, increasing the capacity of small- and medium-sized enterprises (SMEs) in ASEAN member states, and expanding a vibrant internet economy.

The United States has supported the implementation of the ASEAN Single Window, a customs facilitation tool, and we have trained the leaders of SMEs through a flagship partnership between USAID and the U.S.–ASEAN Business Council. To date, more than 3,500 SME owners have participated in this program.  This year, we also launched two new dialogues on information communications technology, with a particular focus on promoting internet connectivity and e-commerce, and aviation.  We are launching a Youth Innovation Challenge to identify cutting-edge solutions to cross-border ASEAN priorities and connect youth innovators with U.S. private sector networks.  The United States and ASEAN also finalized a robust U.S.–ASEAN Energy Work Plan focused on increasing efficiency, promoting the use of renewable resources, and improving ASEAN’s electric grid.

The United States is working to reverse environmental degradation and support sustainable fisheries and aquaculture in the ASEAN region. The United States recently began a new multi-year Oceans and Fisheries Partnership that will conserve marine biodiversity and strengthen regional cooperation to combat illegal, unreported, and unregulated (IUU) fishing through a catch documentation and traceability system.  The United States helped ASEAN to set up a public-private body to accelerate adoption of better aquaculture and fisheries management and facilitated the development of a fisheries improvement protocol to advance ethical and sustainable fishing for ASEAN.  Over the past few years, the U.S. government also sponsored multiple workshops to advance the goal of a cleaner, healthier marine environment, including on oil spill response, hazardous chemical clean-up, and combating IUU fishing through both regulation and law enforcement.

The United States strongly supports ASEAN-led regional mechanisms and efforts to advance maritime security and awareness.  We have co-chaired the ASEAN Regional Forum (ARF) Maritime Security Inter-Sessional Meeting since 2012, and we also participate in the Expanded ASEAN Maritime Forum and ASEAN Defense Ministers Meeting-Plus.  Earlier this year, United States Pacific Command (PACOM) hosted representatives of all ASEAN Member States for a workshop on Shared Maritime Awareness and will hold a follow-on workshop in 2016.  Also next year, the United States will sponsor the Expanded ASEAN Seafarer Training (EAST) Workshop on Counter-Piracy for the third time.  These efforts complement U.S. security assistance to ASEAN member states focused on enhancing maritime security capabilities.

Cultivating the Emerging Leaders of ASEAN

Young people represent 65 percent of ASEAN’s population.  We are developing a regional network for ASEAN youth to collaborate on solving common challenges, creating new opportunities, and building an ASEAN identity.  For example, the Young Southeast Asian Leaders Initiative (YSEALI) was launched by President Obama in December 2013 and now engages more than 47,000 participants aged 18-35.  It provides training, networking opportunities, and a platform to discuss their generation’s greatest challenges.  This past June, the President met with 55 YSEALI Professional Fellows and 20 YSEALI Academic Fellows at the White House.

The Fulbright U.S.-ASEAN Visiting Scholar Initiative awards scholarships for up to four months of research in the United States on issues central to the U.S.-ASEAN relationship and complements the 700 Fulbright scholarships between the United States and ASEAN Member States awarded annually.  The ASEAN-U.S. Science and Technology Fellows Program supports ASEAN early-career scientists to work for one year in ministries in their home countries to increase science-based policymaking.  With U.S. support, the ASEAN Youth Volunteer Program (AYVP) is mobilizing young volunteers to develop innovative solutions to social, cultural, economic, and environmental challenges. Over the past five years, the Peace Corps and ASEAN have doubled the number of countries and volunteers serving in ASEAN, and we anticipate further growth in 2016. The Peace Corps also works with ASEAN to develop volunteer-sending programs within ASEAN.

Promoting Opportunity for Women in ASEAN

Research shows that the more girls and women are educated and join the workforce, the more economies grow, infant mortality falls, and communities prosper.  The United States supports the ASEAN Commission on the Promotion and Protection of the Rights of Women and Children (ACWC) by strengthening ACWC as an institution, supporting the development of a network of social service agencies, and helping to harmonize regional approaches to addressing violence against women and children.  The U.S. Government is supporting women entrepreneurs in partnership with the ASEAN Women Entrepreneurs’ Network.  For example, we are supporting majority women-owned enterprises, women entrepreneurs, and women artisans in Southeast Asia who develop products and services under fair-employment and fair-trade conditions.  Known as “GREAT Women in ASEAN,” this initiative is helping companies grow to reach new markets, and to take advantage of the ASEAN Economic Community’s regional platform.  In collaboration with the ASEAN Committee on Science and Technology (COST), this year we announced a new commitment to award an annual ASEAN-U.S. Science Prize for Women.

The November 2014 U.S.-ASEAN Joint Statement on Climate Change demonstrates our shared commitment to address this global issue.  The United States and ASEAN will continue cooperating through a wide range of activities towards a low-carbon economic growth trajectory and building more climate resilient societies.  We look forward to working together at the 21st Session of the Conference of the Parties to the United Nations Framework Convention on Climate Change (UNFCCC) to achieve an ambitious, inclusive and durable agreement.  The United States is also proposing to engage ASEAN militaries to share our experience and technical knowledge in energy efficiency and reducing the carbon footprint of defense operations.

We have long been a supporter of the ASEAN Wildlife Enforcement Network, helping to reduce consumer demand, strengthen law enforcement, and promote regional cooperation.  The United States provided training for about 4,000 law enforcement officials and support for anti-wildlife trafficking efforts that since 2008 has led to the confiscation of wildlife worth about $90 million on the black market and to the arrests of 1,332 suspects.  The United States also helped train 30,000 ASEAN individuals in natural resources management and biodiversity conservation over the last five years.

The United States supports a victim-centered approach to combatting trafficking in persons and welcomes ASEAN’s new Convention against Trafficking in Persons, Especially Women and Children and is working with ASEAN on implementation of the Convention which will harmonize domestic trafficking-in-persons laws throughout the region.  We are engaging with ASEAN to counter violent extremism and terrorism, and to provide support for the victims of terrorism.  The International Law Enforcement Academy Bangkok has trained over 3,000 ASEAN officers since 2012.  The curriculum is geared to help the civilian criminal justice sector address a variety of transnational threats such as organized crime, trafficking in persons, wildlife trafficking, and corruption, in addition to counterterrorism.

The United States partners with ASEAN and countries in the region to promote openness and good governance, strengthen the rule of law, and build accountable institutions that are responsive to the needs of people in the region, including by helping ASEAN human rights bodies to integrate international human rights standards into legislative and judicial processes.  We are also working to strengthen regional civil society networks that promote and protect human rights.

Cybersecurity’s importance to security and economic prosperity is of particular concern in Southeast Asia given that e-commerce is a major driver of economic growth for many ASEAN countries.  This year the United States co-chaired an ARF Seminar on Operationalizing Confidence-Building Measures (CBMs) with a goal of reducing the potential for cyber conflict by fostering transparency, cooperation, and communication mechanisms.  The United States supports continued cooperation with ASEAN states on cyber issues, including to build greater consensus on international norms of responsible state behavior in cyberspace.

The United States works with ASEAN’s civilian and military authorities to improve peacekeeping and the legacy of landmines and unexploded military ordnance.  The United States also works closely with ASEAN governments’ disaster management authorities and the ASEAN Coordinating Center for Humanitarian Assistance on disaster response coordination in support of the ‘One ASEAN, One Response’ initiative.