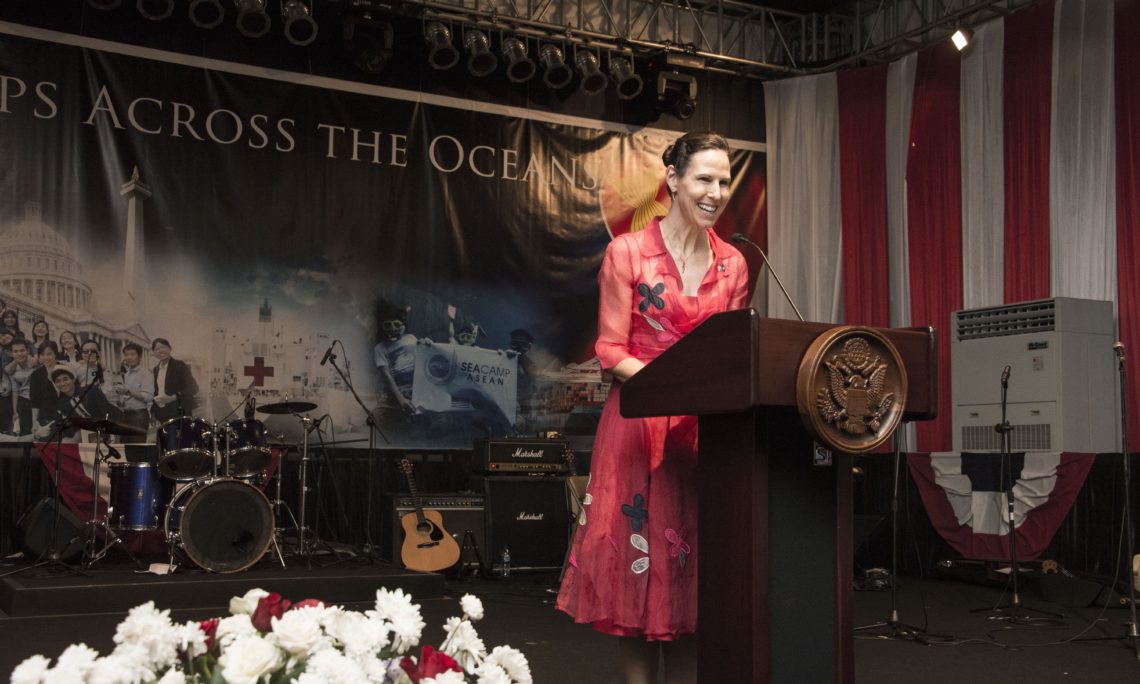 Ambassador Donovan, on behalf of the US Mission to ASEAN, I’m so pleased to join with the bilateral mission in this celebration of the anniversary of the American Declaration of Independence.

242 years ago, one of the five primary drafters of that document – Benjamin Franklin – famously persuaded other early American leaders to support the structures being created by saying “we must all hang together, or assuredly, we shall all hang separately”.

Hanging – or joining – together, he believed was the best strategy to avoid threats to that early dream of independence. And he smartly recognized that unless young America quickly became a secure and rules-based country, its early leaders were, themselves, at risk.

I understand that in 1967, at the founding meeting of ASEAN, Singapore’s then-Foreign Minister HE S. Rajaratnam echoed a similar sentiment, saying “If we do not hang together, we of the ASEAN nations will hang separately.”

The states that would become the United States and the countries of ASEAN both smartly recognized the importance of structure – of architecture – in designing an effective association.

Today ASEAN is prosperous and peaceful, with a strong record of accomplishment in areas as diverse as countering transnational crime, promoting sustainable development, and managing natural disasters.

And, at the heart of the Asia-Pacific region, ASEAN is diplomatically, economically, and strategically central to U.S. interests in the 21st century.

With the countries and citizens of ASEAN, we share a strong and enduring interest in building and sustaining a rules-based order in the Indo-Pacific.

Recognizing today’s theme of Partnerships Across Oceans, I will note that expanding maritime cooperation is one of the five priority areas of the ASEAN-U.S. Strategic Partnership.

To reinforce our commitment to a free and open Indo-Pacific, the United States is proud to work with ASEAN Member States to develop and enhance cooperative Maritime Domain Awareness.

USAID’s Oceans and Fisheries Partnership with the Southeast Asia Fisheries Development Center and partnership in the Safe Ocean Network is one example of how we’re doing this.

Ambassador Donovan mentioned the Young Southeast Asian Leaders Initiative – (YSEALI) – one of the flagship programs of USASEAN, and – as he noted – a program engaging many brilliant, young Indonesians. We’re delighted that a YSEALI Marine Debris Expedition workshop will be held in Jakarta in August, bringing 60 Young Southeast Asian Leaders from all 10 ASEAN countries together to gain a deeper understanding of the serious problem of marine debris.  Through a field expedition, these young leaders will gain hands-on experiences before returning to their home countries to apply new knowledge in their own communities.

Since its launch in 2013, the YSEALI network has grown to almost 120,000 members, with over 2,100 young leaders having had the chance to participate in regional workshops like this one on marine debris.

I hope everyone here tonight will have a chance to visit the “Divers Clean Action” booth. This is a non-profit organization founded by YSEALI alumni dedicated to keeping Indonesia’s oceans clean…. They’re the ones who will be running the August workshop.

I’ll close by echoing Ambassador Donovan’s thanks to you all for being present tonight in this celebration of all the shared history and future promise which bring together the U.S. and the countries and citizens of ASEAN…. One could say we continue to demonstrate the benefits of “hanging together”!