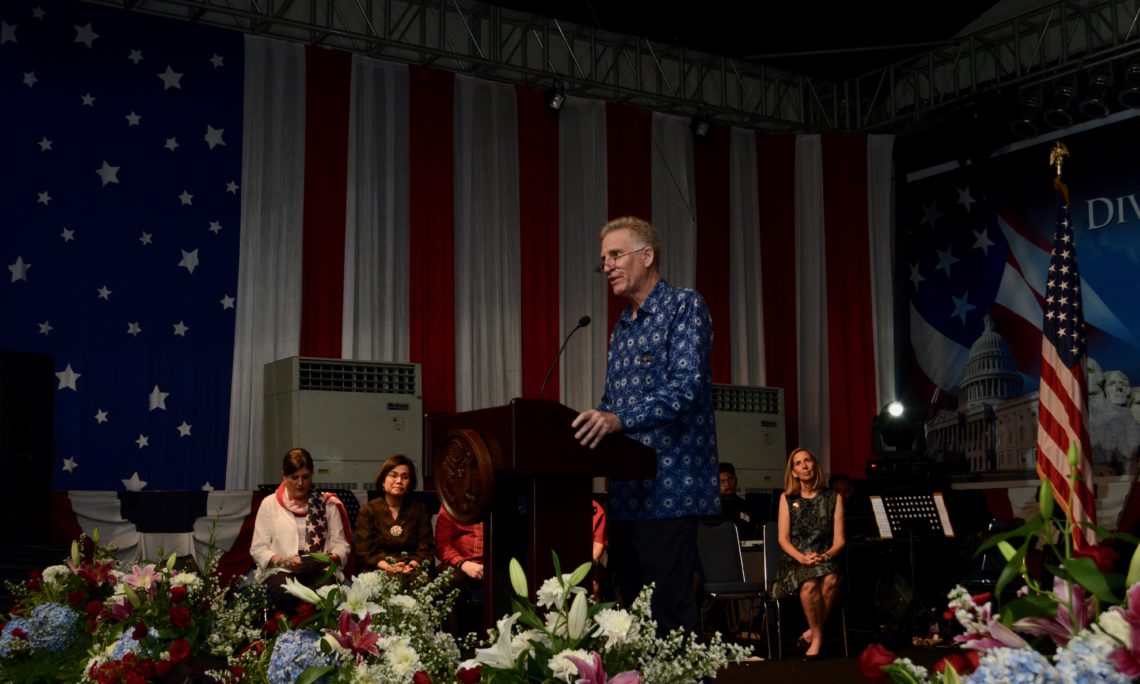 Greetings Minister Sri Mulyani and ASEAN Secretary General Lim Jock Hoi, selamat datang and welcome. Ambassador Donovan, on behalf of the U.S. Mission to ASEAN, we’re pleased to join with you and the bilateral mission in this celebration of the 243rd anniversary of the American Declaration of Independence. And I’m particularly happy to mark it alongside another remarkable anniversary, the 70-year mark of bilateral diplomatic relations between the United States and Indonesia.

Make no mistake: ASEAN, at the heart of the Asia-Pacific region, is diplomatically, economically, and strategically central to the U.S. vision for the region, and the world. Along with the countries and peoples that make up ASEAN, the United States shares a strong and enduring interest in building and sustaining a rules-based order in the Indo-Pacific. We have been ASEAN’s faithful partner for 42 years, and we will continue to be far into the future. The United States first engaged with ASEAN as a dialogue partner back in 1977. We were the very first non-ASEAN country to name an Ambassador to ASEAN, in 2008. In 2010, the United States became the first non-ASEAN country to establish a dedicated Mission to ASEAN. And in 2015, the U.S.-ASEAN relationship was elevated to a strategic partnership.

Today’s theme of Diversity, Partnership, and Prosperity feels so right for ASEAN, and for our partnership with it. We have five priority areas of cooperation in the U.S.-ASEAN Strategic Partnership: supporting economic integration, expanding maritime cooperation, cultivating emerging leaders, promoting opportunity for women, and addressing transnational challenges. We’re active on all those fronts, and for those who want to know more we have photos and displays all around the venue that capture something of our close partnership – I encourage you to explore and check and them out!

In particular, I hope everyone here tonight will take a moment to visit the booth for the Young Southeast Asian Leaders Initiative – known as YSEALI. YSEALI is one of the flagship programs of USASEAN, engaging with brilliant, young Indonesians and others leading a new generation across all the ASEAN countries. YSEALI offers professional and academic exchanges to the United States, regional skill-building workshops in different ASEAN countries, grants for initiatives, online resources, community service projects, and much more. Since its launch in 2013, the YSEALI network has surpassed 140,000 members, and it continues to grow.

So, that’s a little about us, and why we’re so happy to be with you here today. Because this is the day we celebrate the ideas that led to the creation of the United States; and I see many of those same ideas are at work right now, building a brighter future for the people of Indonesia and all the countries of ASEAN.

Thank you all for joining us tonight in this celebration of the ideas, history, and future promise that forge such a strong bond between the peoples of the United States and those of Indonesia and the ASEAN countries. Thank you, and enjoy the evening!