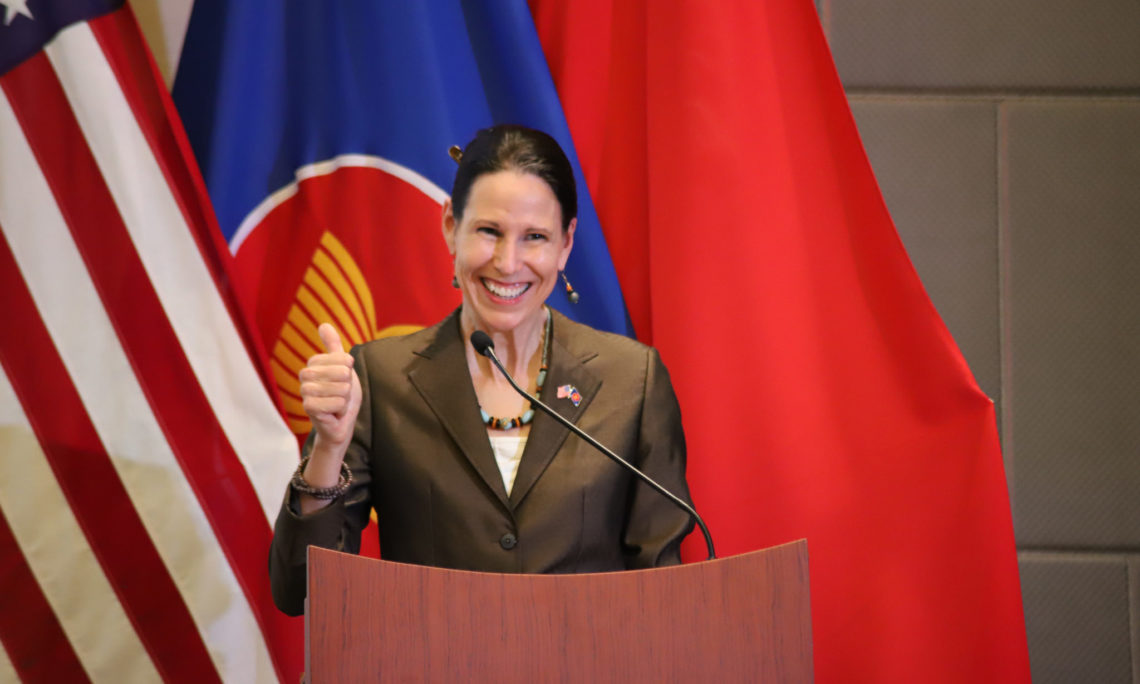 To open this evening’s celebration, I would like to invite the 150 participants of 2018 YSEALI Summit to join me in shouting out: “Happy Fifth Birthday YSEALI.”  As an aside, not only is tonight YSEALI’s birthday, it also is the International Day of Persons with Disabilities – or, a term I recently heard and immediately adopted: “diffabilities.”  I like that term because it reflects the more nuanced point that we all have different capabilities and limitations.  YSEALI programs are focused on four core priorities, one of which is civic engagement.  An area of focus for many of YSEALI’s civic engagement activities has been promoting inclusion and the full participation of people with different abilities.  So, this is a very welcome synergy.

WHAT YSEALI HAS ACHIEVED

The YSEALI network has grown to more than 135,000 members since its inception in 2013.   Nearly 2,500 young south east Asians have participated in YSEALI events in the ASEAN region, including workshops and summits.  Moreover, 1,727 have traveled to the U.S. via YSEALI’s academic and professional exchange programs.  YSEALI has provided more than $1 Million funding for more than 80 projects so far. Inspired, we like to think, by their YSEALI experience and by the energy of the network, individual YSEALI alumni are addressing the region’s critical challenges and seizing opportunities to get their voice into the discussion in their communities, countries and the region.  A few examples:

The motto of the Association of South East Asian Nations is: One Vision, One Identity, One Community.  In various summits, the leaders of ASEAN – your leaders – have agreed on a vision of a “community of opportunities” that is “politically cohesive, economically integrated, and socially responsible.”  They see ASEAN as an organization increasingly empowered to serve the people of South East Asia.  For its part, my country, the United States, sees ASEAN as a strategic partner.  ASEAN is central to our efforts and interests in the Indo-Pacific.  This was the primary message VPOTUS Pence conveyed during his very active participation in the US-ASEAN and East Asia Summits held here in Singapore just two weeks ago.

When the leaders of the US and ASEAN member states held their first special summit together, in 2016, they stressed the importance of shared prosperity; sustainable, inclusive economic growth and development; and MOST IMPORTANTLY nurturing our young people to sustain continued peace, development and stability for mutual benefit.

Nurturing our young people to sustain continued peace, development and stability for mutual benefit: that is the rallying cry for YSEALI.  We believe in you, we believe in the power of young people across south east Asia and the United States connecting and contributing.  We’re convinced that be bringing you together and giving you a voice through YSEALI, we are nurturing the exciting, vibrant ASEAN Community of the future.  And, we’re further forging the connections between that community and the U.S.

This yea’s summit has been all about the important themes of innovation and entrepreneurship.  The United States is committed to support the expansion and deepening of ASEAN’s economic integration.  We see this as a way to expand opportunities for U.S. firms to export goods and services, to participate in the growth of the region through investment, and through doing, to improve the lives of the people in the region.  I was very enthused by the ideas I heard earlier, during the Summit’s initial slam session.  I want to encourage all of you to pursue your dreams of launching those sorts of innovative enterprises that will contribute to the economic growth of ASEAN and increase investment opportunities in the U.S.-ASEAN partnership.  Equally, I also encourage you to stay connected with the network, mentors and friends you meet in the Summit.

By the way, that network is geographically expanding.  We are delighted that Timor Leste is now part of YSEALI – effective June 2018 when the first participant from Timor-Leste, Kaka, joined the YSEALI Marine Debris Workshop.

TYING THIS ALL TOGETHER – YOUnified 2018

The idea of holding an annual community service campaign celebrating the power and potential of YSEALI members was launched in 2016.  At that time, 16,000 members led 107 projects in what was then the largest-ever day of community service in South East Asia.  That’s something that YSEALI has given to this region, of which we’re intensely proud.  In 2017, there were 120 community projects, albeit a slightly smaller number of participants.  As we launch YOUnified 2018 TODAY, we excited for it to be the biggest, most productive yet…. because that’s what GROWING THIS NETWORK of committed individuals means.  Have fun and learn during your service activities tomorrow – and throughout this wonderful 2018 YSEALI summit!