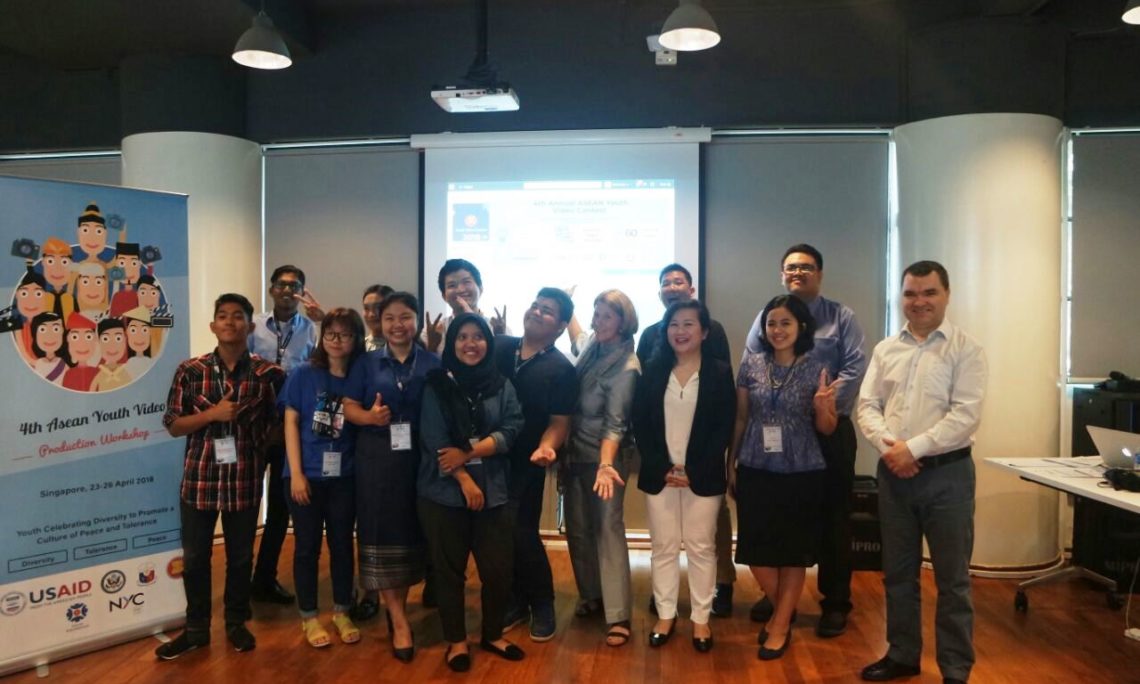 April 23rd 2018. Following the success of the past three years, the United States Government through ASEAN-U.S. PROGRESS project, and in partnership with the ASEAN Foundation, are supporting the 4th ASEAN Youth Video Contest. Designed to enhance youth leadership and civic engagement, the contest is open to all ASEAN citizens between 18 and 30 years old. Top finalists from each participating ASEAN Member State (AMS) are selected based on an initial 60-second video to participate in a video production workshop to strengthen skills and produce a final two-minute video highlighting perspectives on how youth in ASEAN celebrate diversity to promote a culture of peace and tolerance.

From April 23rd – 26th, nine finalist representing Brunei Darussalam, Cambodia, Indonesia, Laos PDR, Malaysia, Myanmar, the Philippines, Thailand, and Vietnam gathered in Singapore for a four-day video training workshop to refine and produce their final two-minute videos. The participants were selected through competitive process from over 134 entries from nine AMS. Over the course of the four days, under the guidance of a video production specialist, participants learn about story development, script writing and filming, post-production, and social media strategies in order to effectively tell their stories to the public through a short video.

The training program is being held at “The Red Box,” generously donated by the National Youth Council of Singapore. After the training program, finalists will further develop their video ideas and submit their final video to be eligible to win cash prizes. The winner will be announced in early June 2018.

In her remarks, Ms. Abdullah emphasized the four year journey of the ASEAN Youth Video Contest and appreciates its achievements. “… every year, we hear of the many and great achievements and the expectations the contest and its participants have surpassed. The hallmark for me this year has to be the bravery displayed by the contestants, who have explored thoroughly the dimensions of the given theme:  ‘Celebrating Diversity in the Promotion of Peace and Tolerance.’”

These young filmmakers are convening in Singapore to hone their video making skills under the guidance of a professional video producer. For the next four days they will learn the tips and tricks of film making to celebrate ASEAN diversity and promote a culture of peace and tolerance.

The workshop will enrich the finalists’ skills in story development, script writing and filming, post-production, and social media strategies in order to effectively tell their stories to other young people in the region.  Show your support by following their posts on https://www.facebook.com/AYVC2018/ and under the hashtag #AYVC2018! #AYVC2018 #ASEAN #ASEANYouth #YouthVideo @USAIDAsia @ASEAN @ASEANFoundation @USMission2ASEAN @USAIDIndonesia