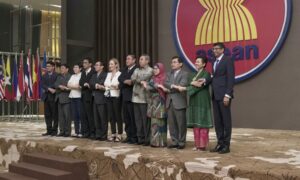 JAKARTA, 14 February 2020 – ASEAN and the United States reiterated commitment to strengthen their strategic partnership for mutual benefit at the 11th Meeting of the ASEAN-U.S. Joint Cooperation Committee (JCC) held at the ASEAN Secretariat today.

At the meeting, ASEAN and U.S. officials noted that the longstanding partnership has expanded to cover a wide spectrum of areas under the three ASEAN Community pillars. Taking stock of ASEAN-U.S. cooperation, officials from both sides noted that the ASEAN-U.S. Plan of Action (2016-2020) has fully implemented its final year. The two sides looked forward to the finalisation of the new Plan of Action (2021-2025) which will continue to support ASEAN’s efforts in the promotion of peace, security and prosperity in the region.

ASEAN officials looked forward to U.S.’ continued support for ASEAN’s community-building efforts, including its development cooperation programmes such as the Inclusive Growth in ASEAN through Innovation, Trade and E-Commerce (IGNITE) and the Partnership for Regional Optimization within the Political-Security and Socio-Cultural Communities (PROSPECT). Noting the importance of these development cooperation programmes, ASEAN and U.S. officials will work towards a Regional Development Cooperation Agreement that will contribute to further deepening cooperation between the two sides.

In underscoring the commitment of ASEAN and the U.S. to strengthen their strategic partnership, officials from both sides looked forward to the convening of the ASEAN-U.S. Special Summit, on 14 March 2020 in Las Vegas, Nevada to chart the future direction of the relations.