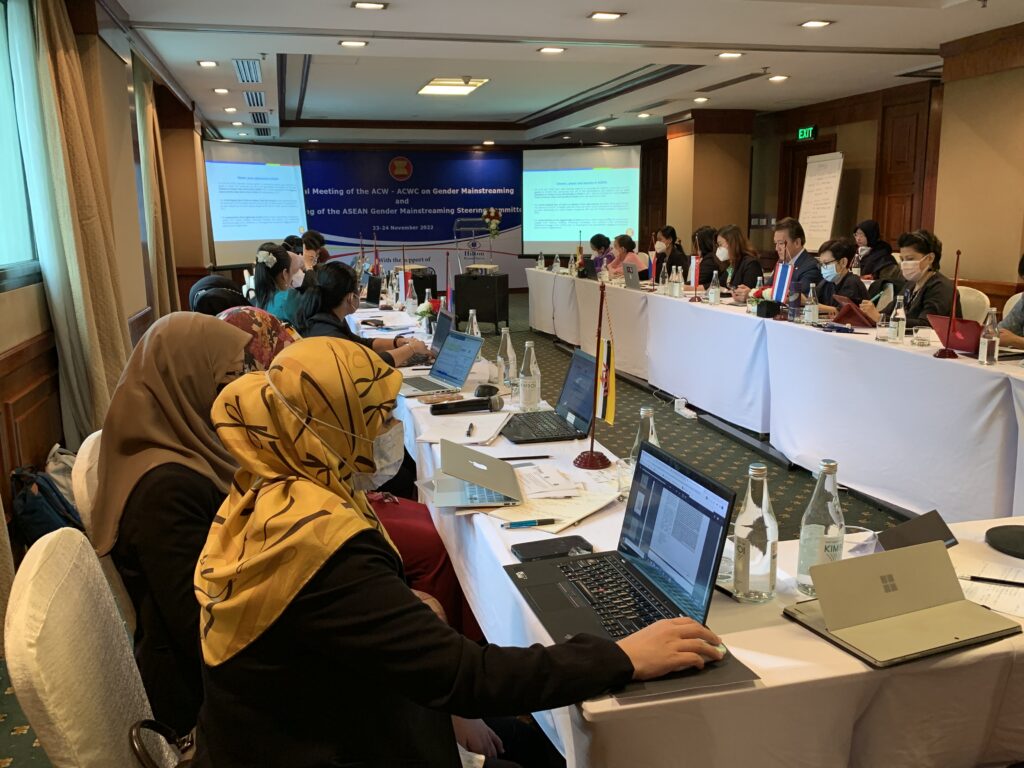 Hanoi, Vietnam — November 23-24 2022. In support of ASEAN’s efforts to strengthen gender equality and women’s empowerment in the region, the U.S. Agency for International Development (USAID) supported the first Special Consultation Meeting on Gender Mainstreaming by the ASEAN Committee on Women (ACW) and ASEAN Commission on the Promotion and Protection of the Rights of Women and Children (ACWC) in Hanoi. Representatives from all ten ASEAN Member States gathered to map progress and immediate next steps to effectively implement the ASEAN Gender Mainstreaming Strategic Framework launched earlier this year.

The two-day meeting, facilitated by the ASEAN-USAID Partnership for Regional Optimization within the Political-Security and Socio-Cultural Communities (PROSPECT) project, included over 30 participants, and emphasized the importance of raising awareness and building ownership for the gender mainstreaming agenda across the ASEAN Community. Representatives agreed to jointly develop an advocacy and communications plan and to establish a multi-sectoral ASEAN Gender Mainstreaming Strategic Steering Committee to guide the development of a Gender Mainstreaming Implementation Plan.

“The discussions and decisions of today and tomorrow will be key to foster momentum and set the scene for the cross-sectoral cooperation necessary for attaining the ambitious ASEAN-wide vision laid out in the framework,” said Mr. Diman Simanjuntak, Senior ASEAN Affairs Officer of the U.S. Agency for International Development (USAID) ASEAN Office, in his opening remarks. Mr. Simanjuntak went on to affirm U.S. partnership with ASEAN on next steps, adding, “As the ASEAN Gender Mainstreaming Strategic Framework is operationalized, the United States will continue its commitment to support ASEAN and its development partners on this important  objective. We view gender equity and equality as a matter of human rights, social inclusion, justice, and fairness—and a strategic imperative.”

Building upon a strong partnership with the ACW and the ACWC that began in mid-2019 with initial consultations on the development and drafting of the framework, USAID is continuing assistance efforts to advance gender mainstreaming in ASEAN. In early 2023, USAID’s PROSPECT project will support the establishment of a steering committee to lead in drafting an Implementation Plan. This plan will outline a strategic, systematic, and accountable approach to ensure that gender and inclusion become core considerations in the design, implementation, monitoring and learning of all ASEAN programs, including its meaningful integration into the 2025 to 2035 Community Blueprints.

Under its Comprehensive Strategic Partnership with ASEAN, the United States (through USAID)  and ASEAN jointly promote gender mainstreaming, women’s leadership in the science and technology sectors, women’s economic empowerment and entrepreneurship, and the Women, Peace and Security agenda through numerous initiatives. Ongoing and future cooperation will be guided by commitments outlined in the recent Joint Statement of the ASEAN-U.S. Ministerial Dialogue on Gender Equality and Women’s Empowerment.