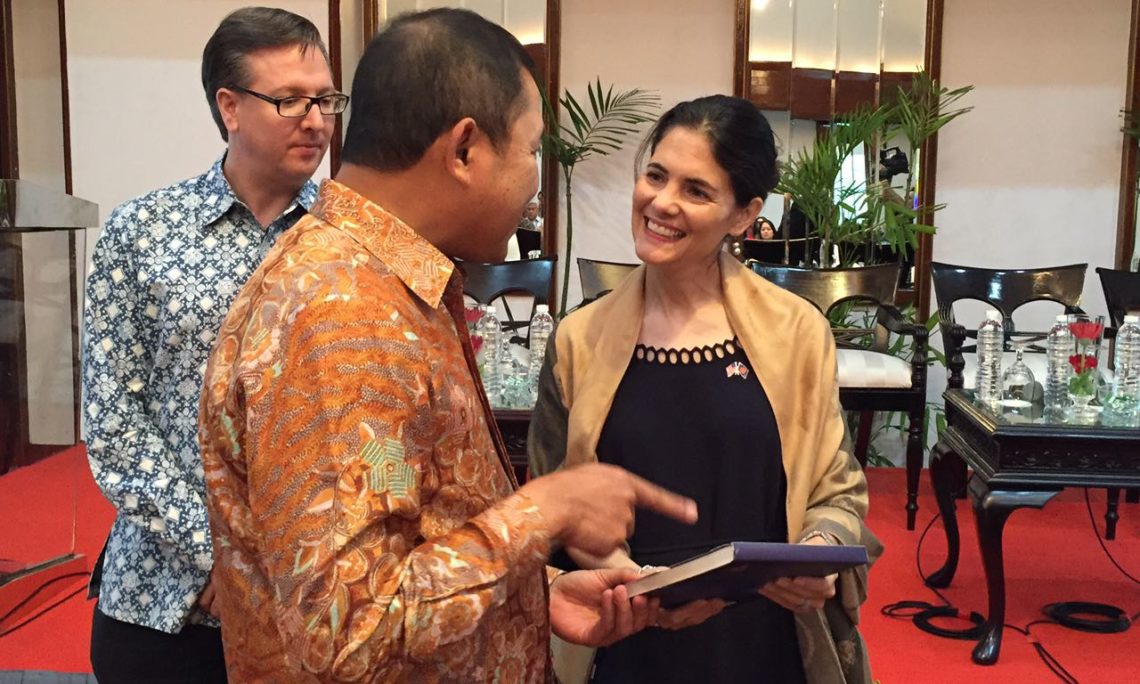 It is a true pleasure and honor to be here this afternoon with all of you to speak at the launch of the USABC-Deloitte report “Advancing the ASEAN Economic Community: The Digital Economy and the Free Flow of Data.”

The United States is a steadfast partner and supporter of ASEAN.

We invest our time, resources and attention in ASEAN because it is in our national interest to do so.

So you can count on America continuing to be very engaged when a new Administration begins on January 20th.

Next year, ASEAN will also celebrate its 50th birthday as well as 40 years of relations between the U.S. and ASEAN.

The United States was the first country, in fact, to establish a dedicated mission and a dedicated Ambassador to ASEAN.

As we close come to the 2016, U.S.-ASEAN relations are very strong.
Last year, we elevated our relationship with ASEAN to a strategic partnership.

And at the Sunnylands Summit this past February, we launched U.S.-ASEAN Connect, a strategic framework for economic engagement with ASEAN and the ASEAN Member States.

U.S.-ASEAN Connect brings together all the resources and expertise of the U.S. government and private sector to create a whole-of-U.S. approach to economic engagement in the region.

Connect reflects both the U.S. government and U.S. private sector’s desire to support increased U.S.-ASEAN trade and investment as well as ASEAN’s continued integration efforts under the ASEAN Economic Community.

We already have a very strong economic relationship.

Two-way trade in goods between the US and ASEAN grew to $226 billion in 2015, making ASEAN America’s fourth largest trading partner and supporting millions of jobs on both sides of the Pacific.

American companies are, by far, the largest cumulative investors in Southeast Asia.

Our companies have been here, investing billions of dollars in facilities, infrastructure and in people, for many decades.

The quantity of U.S. investment is important but so is the quality.

American companies hire local employees in all 10 ASEAN states, where they transfer skills and technology and invest in communities.

But there is potential for even more.

The vision of an ASEAN Economic Community with the free flow of goods, services, capital and skilled labor is an exciting prospect for U.S. business because many of our companies want to take a regional approach.

The United States government, for our part, has invested millions on programs like the ASEAN Single Window to help goods move more freely across borders.

We have partnered with USABC to train SMEs, now over 4500 of them. This program connects ASEAN SMEs with the global value chain.

We recently launched a $21 million program to assist ASEAN in developing renewable energy connected to the grid.

We are also very active in supporting innovation and entrepreneurship.

We have supported WeCreate centers in Cambodia and Vietnam that launch women-owned start-ups, for example and have offered training to thousands of young entrepreneurs in the region.

U.S.-ASEAN Connect will launch its Digital Economy Series next year hosting conversations between US and ASEAN officials about how to regulate digital trade in ways that promote growth and also meet legitimate security and privacy concerns.

The report USABC and Deloitte release today, “Advancing the ASEAN Economic Community: The Digital Economy and the Free Flow of Data,” will be a excellent launching off point for some of those discussions.

This report provides a useful snapshot of where ASEAN stands in relation to its own AEC objectives which it hopes to pursue in the digital economy realm.

ASEAN is already #3 globally in numbers of mobile subscribers and #4 in terms of Internet users.

It is expected to expand into one of the world’s top-five digital economies by 2025.

As the report concludes, “with the right policy framework, more of the 636 million people in Southeast Asia will become connected and ever larger numbers will transact online. They will do so because they will have more choice and get better value than from traditional channels.”

ASEAN can truly unlock its potential through integration once it becomes a region open to the free flow of information.

The ability to move information across borders will help determine which economies can succeed and which get left behind.

These issues are especially important for SMEs.
In the US, of all the ways the Internet has changed our economy, one of the most significant effects is how it has leveled the business playing field for SMEs and entrepreneurs.
According to a recent report, more than four million U.S. firms have web sites and more than half of those businesses have fewer than five employees.
Companies that have broadband-connections report annual median sales revenues approximately $300,000 higher than businesses without broadband access.
In the US, we now have the luxury of taking for granted how connectivity is an increasingly essential component of economic growth for small businesses.

In a recent survey by the U.S. Small Business Administration, respondents generally agreed that high-speed Internet access is “as essential to my business as other services such as water or electricity.”
For the SMEs which make up 95 percent of jobholders in the ASEAN region, the Internet and the Cloud can be the equalizer which gives them the opportunity to present their new and dynamic ideas, products, and services to a global marketplace.

It gives them broader access to financing, the key driver in SME success.

And it gives them access to the vital human resources necessary to remain creative and cutting edge.

I have a personal stake in this.

I want to be able to buy the beautiful batik and other handicrafts from Indonesia once I am back in the U.S.

As the report says, “Already a profitable place to invest, the combination of integration and digital will expand the universe of investment opportunities in Southeast Asia. Sustained investment will fuel and enhance Southeast Asia’s position as one of the fastest growing regions of the world.”

We hope this report serves as a resource in many conversations between business, regulators, and entrepreneurs on ways the digital economy will help ASEAN leap frog towards its economic integration goals.

Meeting those goals is in ASEAN’s interest and in ours, and we will continue to support ASEAN in that effort, through US-ASEAN Connect, now and in the future.

I hope you find this afternoon’s discussion useful and interesting.