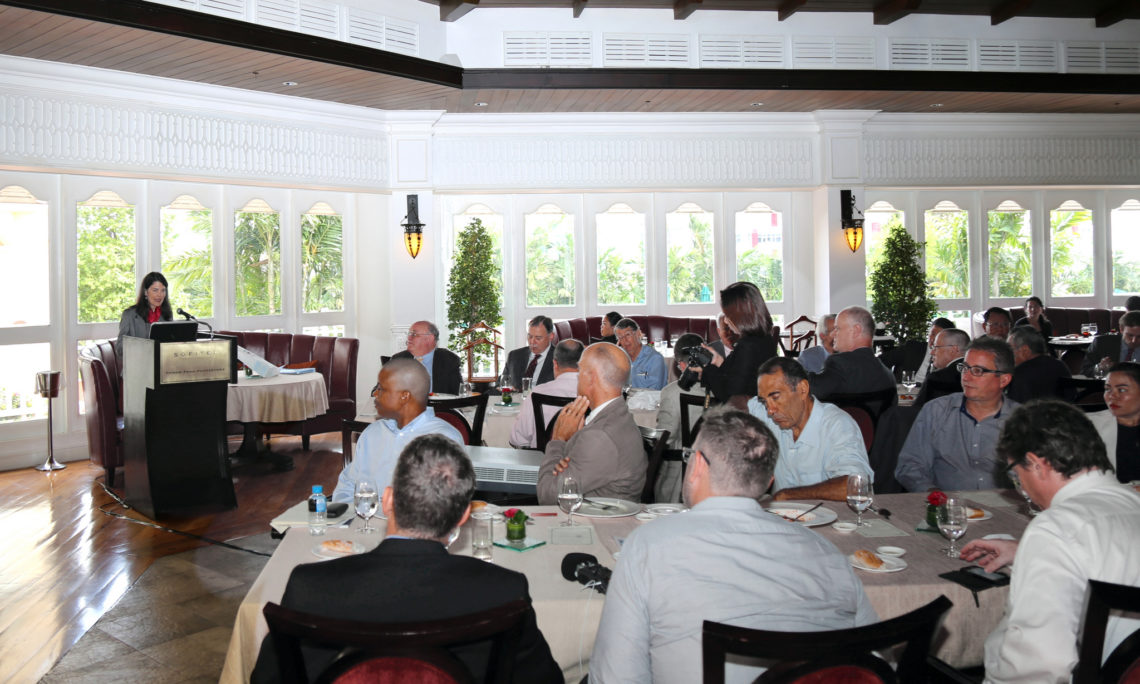 Thank you Brett, very much, for that kind introduction and it is great to see all of you here.

As you know, when President Obama took office, he decided to refocus American resources and attention in Asia. The Rebalance began with his explanation in Australia in 2011:

ASEAN sits at the heart of the regional architecture in Asia, and our relationship with this institution has been cornerstone of the U.S. Rebalance to Asia. ASEAN will turn 50 next year and we will celebrate our 40th year of relations. In its half-century of history, ASEAN has become central to peace, prosperity, and progress in the Asia Pacific.

Our mandate at the United States Mission to ASEAN is to partner with ASEAN and other stakeholders to advance a peaceful, prosperous, and integrated Southeast Asia that respects the rule of law, upholds the dignity of its people and actively addresses regional and global concern. We have worked to advance five priorities in our relationship with ASEAN: supporting economic integration; expanding maritime cooperation; cultivating emerging leaders; promoting opportunity for women; and addressing transnational challenges.

So let me talk about a couple of those, starting with young people.

As you well know, ASEAN is a young region, with two thirds of the population of over 600 million people, under 35. Since launching our Young Southeast Asian Leaders Initiative (YSEALI) in 2013, more than 100,000 young people have joined, from all ten ASEAN countries, with aspirations to build a better future for themselves, their communities, and their countries. Everytime I meet with groups of these young people, I am so impressed with their passion and ingenuity and energy. As I tell them, I am confident about the future of ASEAN when I get to meet its future leaders.

This was also true last week, when thanks in part to our private sector partners of Air Asia, Visa, IBM and GE, we hosted the first US-ASEAN Women Leadership Academy for YSEALI. We had fantastic participants from all 40 countries and were impressed by the three young leaders from Cambodia. We are always happy to have collaborators if any of you are interested. Also in Jakarta, several weeks ago, we welcomed our third cohort of ASEAN-U.S. Science and Technology fellows—ASEAN scientists whom the U.S. sponsors to spend a year in their own government ministries, to support science-based policy-making. So those are two examples of our building ties between the US and ASEAN but, just as importantly, building ties among young people from the ten very diverse ASEAN countries.

I’ll turn now to another key priority of the Mission, of interest to you, which is to support ASEAN’s project of economic integration and the economic relationship between the US and ASEAN.

ASEAN is America’s 4th largest trading partner, and the U.S. invests more in ASEAN than in China, Japan, and Korea – combined. U.S. companies have invested tremendous resources and efforts here in Southeast Asia for decades—we are the largest cumulative investor in ASEAN. That investment and trade has created millions of jobs in ASEAN and back home. But it’s not just the quantity of U.S. investment, it’s the quality and commitment that really sets our companies apart. When our companies invest, you make a difference in the communities in which you operate, whether that’s through hiring locally, developing skills, conducting corporate social responsibility activities, or transferring technology.

For example, here in Cambodia, Ford has helped build wells and helped to construct and repair schools in rural areas throughout the country. We’re also proud that U.S. companies have a track record of providing training and valuable experiences for future leaders around the world; In fact, here in Cambodia Minister of Public Works and Transport Sun Chanthol worked at GE for many years, starting as a management trainee; and Minister of Commerce Pan Sorasak previously worked at U.S. energy firm UNOCAL.

Now, this past February we held a special leaders summit in Sunnylands in California, the first time we’ve had an ASEAN Summit in the US. For the first session, on economic relations, President Obama invited 3 CEOs to sit around the table with him and the leaders and discuss innovation and entrepreneurship. Afterwards, he announced U.S.-ASEAN Connect as a tangible representation of our resolve to deepen our economic relationship in the ASEAN region. Connect is a unifying, strategic framework that encompasses all of our ongoing and future regional economic efforts.It’s meant to ensure these efforts are responsive to the needs and interests of the U.S. private sector and of ASEAN, and to increase public-private cooperation.

Through Connect, the U.S. government and private sector are continuing and deepening our longstanding commitment to helping ASEAN achieve its vision for an integrated ASEAN Economic Community, a “Community of Opportunity” that empowers small businesses, nurtures innovation and entrepreneurship, and draws trade and investment from around the world – an ASEAN powered by clean energy and innovative ideas. Last month at the U.S.-ASEAN Summit in Lao PDR, President Obama announced some exciting new programs and initiatives we are starting under Connect. You can read more about them on our website, www.usaseanconnect.gov.

But to give you a few highlights, our new Connect programs include:
• A Women’s Livelihood Bond to leverage over $15 million in private capital to lend to women-owned or women-benefiting Micro and SMEs;

• A new agribusiness financing program to leverage up to $30 million in new private capital to support entrepreneurs in ASEAN to address the region’s most pressing development challenges in agriculture and agricultural innovation.

• Clean Power Asia, a new multi-million dollar program to increase the supply of renewable energy connected to the grid in ASEAN;

• A new series of U.S.-ASEAN Trade Workshops that will help non-TPP ASEAN officials familiarize themselves with the elements that go into high-standard trade agreements. The first workshop on e-commerce was held at the end of August; and

• A Digital Economy Series in ASEAN to deliver new assistance programs and to bring together stakeholders from ASEAN governments and the U.S. private sector for dialogues on how to help ASEAN build a vibrant regional digital economy that can drive innovation and inclusive economic growth.

These are all in addition to popular ongoing programs that have trained 4,000 SMEs and that have helped to build the ASEAN Single Window for customs that will help cut red tape once it’s complete. I want to emphasize that a key feature of USASEAN Connect is that we want to work even more closely with the private sector. So we are open to conversations about how to do that, whether it’s in policy conversations or tangible programs.

So what is next?
Well, a critical piece of work to be done is Congressional ratification of the Trans-Pacific Partnership, or the TPP, to which four ASEAN members are signed up. I would like, one day, to see all of them included. The TPP is a 21st century trade agreement that will put in place the highest possible standards that will benefit our workers, our businesses, and our economies. All I can tell you about its fate is that the Obama Administration is dedicated to getting it done.

In closing, I’ll state that the United States will continue its partnership with ASEAN because of its people, because of our close economic ties, and because of its dedication to being a rules-based community that respects international law. We want Asia to continue to enjoy the peace that has allowed so many to prosper, and ASEAN is a critical part of that. So through the rest of the Obama Administration, through our 40th anniversary year next year under a new Administration, and for decades to come, you can count on us being here. The United States will remain steadfast in its support for the ASEAN Community and the people of ASEAN.