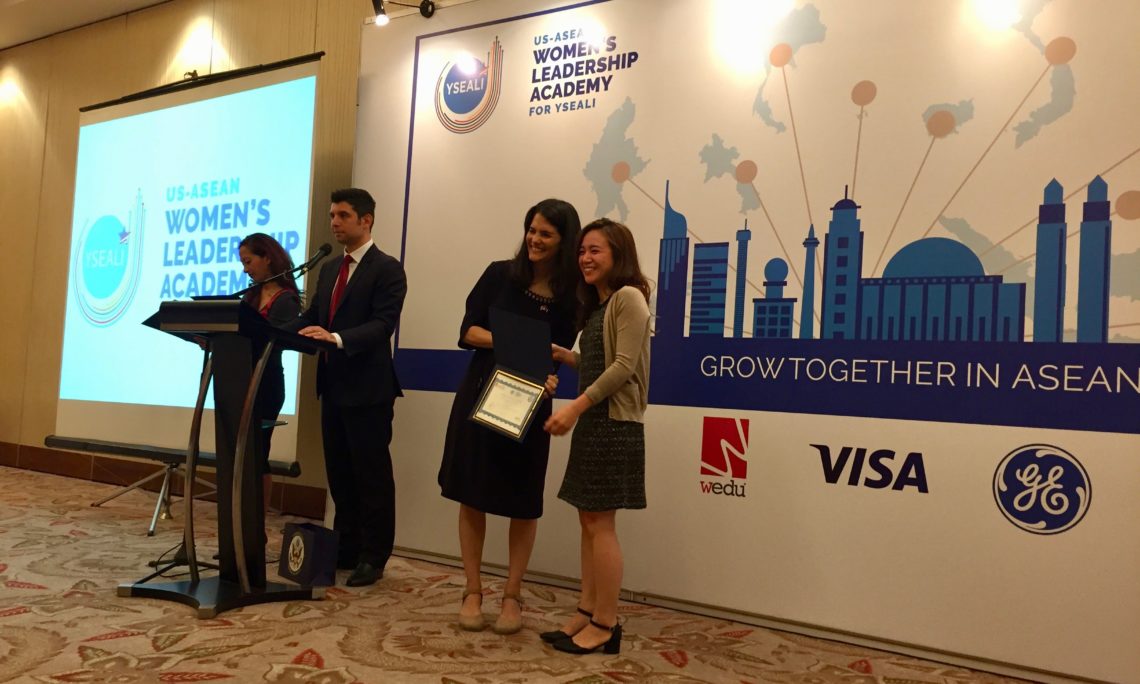 Welcome to this closing dinner of the U.S. – ASEAN Women’s Leadership Academy for YSEALI.

Let me start with a huge and special thank you to our partner Wedu and to Air Asia, Visa, General Electric and IBM for supporting the Academy.

Well, the truth is, I am going to be really sad to see you go. It’s going to be very lonely here in Jakarta without you next week. The Women’s Leadership Academy participants are remarkable people and I am going to miss you.

I’ve gotten to spend some time with you 40 special humans, and your ten mentors, and all of you really inspire me. I know that you will all go on, in different ways, some visible and public
and others small and private, to make a real difference, making this beautiful, diverse, and dynamic ASEAN region even better.

As President Obama said at the YSEALI Town Hall in Laos last month, “While Presidents and Prime Ministers can help lay the foundation, it’s going to be young people like you who build the future of this region and the world.”

Now, it’s easy to look around the world today and be depressed about the state of affairs. Too many people are still living in extreme poverty. ISIS is sewing terror and doing unspeakable things. Girls are bought and sold everyday into sexual slavery. The ocean is being heavily polluted, coral destroyed, and pristine forests are being cleared.

So, yes, the world is somewhat of a mess. But looking at how the role of women has changed in many societies, just over my relatively short lifetime (at least compared with the millennia of human society), gives me hope for humanity that we CAN make things better.

When I grew up, the U.S. Secretary of State had never been a woman and a woman would never have been entrusted with such an important position. But we’ve now had three women who’ve served in that position with distinction, not to mention two who have also been National Security Advisor, which is even closer to the seat of power as the President’s closest advisor on international relations.

When I grew up, there were very few heroines in movies that were both strong and just. The women characters I watched growing up were either strong but evil or they were good but weak, needing to be saved by the men. Now there are many female movie, TV and online heroes that are giving little girls and boys role models.

Newscasters on radio and TV were all men when I was a child. No longer.

When I grew up, if you told me that the head of the IMF and the head of the US Federal Reserve, two of the most important positions for the global economy, would both be held by women, I would have been shocked.

Today, women run some of the world’s largest companies.

When I grew up, it was fairly unthinkable that a woman could run for President of the US as the nominee of one of our two major parties. But one is. And it does look like from polling that enough Americans are comfortable with the idea of a woman leader that she has a chance to win. We will know soon one way or the other, but in either event, a new threshold has been crossed.

So big change can happen, and it DOES happen, even in the course of one lifetime. But it takes focus and dedication, drive, teamwork, passion. And it takes risk. Sometimes very scary risk.

But if we learned anything from the panel I moderated on Wednesday, risk is the best friend of change and progress. So when your heart beats faster at the thought of a new venture, take that as a good sign.

Inequality is still the norm. [It is STILL the case that unconscious bias means that women with the exact same qualifications are thought of as less qualified. Women are not paid equally. Traits that make a male leader more likeable—like decisiveness—make women leaders less likeable. Manterrupting is a phenomenon we’ve all experienced.]

So we have lots of work to do still, but norms are changing, and changing for the good. All of which is to say—positive change happens. It is happening. When things look bleak, have faith that they CAN get better.

To keep furthering opportunities for women, no matter where your life takes you, I’ll ask you to look out for your sisters. Make sure they get a fair shake when you are hiring people. Amplify their ideas in meetings so they get credit. Help create family friendly work places where men and women can do their jobs but also care for their families. Make sure MEN get time off when they have a baby. Encourage your women colleagues to trust in themselves. ASEAN will be stronger if every person, all the men and all the women, can reach their full potential.

I want to thank my staff, Andrea and Nalindra in particular, for working so hard on the Academy. And thanks most of all to you, the participants, for your contributions.

Today marks the end of the Academy, but I hope it is the beginning of a bigger network among you and other young leaders in ASEAN. You are a part of the 100,000 members of the YSEALI family and I encourage you to be active members and alumni in the future.

And stay in touch with me! I want very much to hear how you are doing. I’ll ask my team how we can best organize that online.

So, ladies, take what you’ve learned this week and your new friends, and go forward. Be the change you want for ASEAN and for the world.

We will be with you in spirit, and online, cheering you on.

So keep going and good luck!