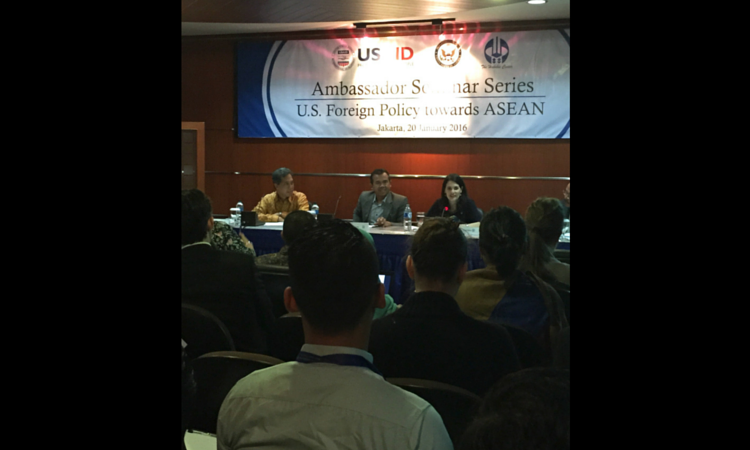 Thank you to the Habibie Center for inviting me to kick off the Ambassador Seminar Series.

I think this is my first public event since the Community was launched so congratulations to ASEAN!  It is a true pleasure and honor to be here this afternoon with my esteemed fellow panelists and friends:

I am looking forward to our discussion on U.S. Foreign Policy towards ASEAN, and I am particularly interested in hearing from the audience and my co-panelists on suggestions for the U.S.-ASEAN relationship.

So let’s get our conversation started.

America is a Pacific power.  That reality was true long before World War II, it was brought home during the latter part of the Twentieth Century, and it continues today in the 21st.

The United States is also a steadfast partner and supporter of ASEAN.  This too, has been the case for many years– for 39 years of ASEAN’s 49 year history.

Even so, President Obama’s focus on Asia as the center of dynamism for this century has brought us to a “new normal” of intense engagement with ASEAN, a cornerstone of the Rebalance to Asia policy.

President Obama established a dedicated mission and a dedicated Ambassador to ASEAN in 2010.  We were the first non-ASEAN country to do this.  But there are now over 80 countries that have Ambassadors to ASEAN, which is impressive!

As we begin 2016, U.S.-ASEAN relations are at an all-time high.  The past November during the U.S.-ASEAN Summit, we elevated our relationship with ASEAN to a strategic partnership.  This partnership will strengthen the role our relationship plays in realizing a peaceful, prosperous Southeast Asia that offers security, opportunity and dignity to all of its citizens.

This new status is recognition of the fact that the ASEAN-U.S. relationship is very important to both of us and that we cooperate on vital issues across ASEAN’s political-security, economic and sociocultural communities.  The relationship has been strategic for some time, but we now the name reflects the reality.

To commemorate and discuss further our strategic partnership, President Obama invited all ten ASEAN leaders to attend a special summit in 2016 in the United States.  This will be the first ever stand-alone ASEAN-U.S. Summit in the United States and it will be the first Summit that ASEAN as a Community will have.  It will take place in California, my adopted home state, next month.

As President Obama said in Kuala Lumpur this past November, “A united, integrated and effective ASEAN in the center of Asia is a force of stability, prosperity and peace.”   In fact, ASEAN unity and integration benefit the United States for many reasons.  We are investing in ASEAN because it is in our clear national interest to do so.  That is why you can count on America continuing to be very engaged no matter who the next President is.  Of course there will always be other parts of the world that also need our attention.  But there are many reasons we will retain a focus on ASEAN.  Today, I’m going to raise five of them.

First, ASEAN is important to American prosperity.  ASEAN is a rapidly growing region with an expanding workforce and a growing middle class.  The ASEAN Community (with a capital C) is good for U.S. business because many of our companies want to take a regional approach.  That means more jobs back home as well as more jobs in Southeast Asia.  A classic win-win outcome.

You may not know that American companies are the largest cumulative investors in Southeast Asia.  Our companies have been here, investing billions of dollars in facilities, infrastructure and in people, for many decades. American private sector investment, over USD $200 billion, is more than China’s, Korea’s, and Japan’s combined.  That investment here has created millions of jobs in both the United States and in ASEAN.

The quantity of U.S. investment is important but so is the quality.  American companies hire and train local employees in all 10 ASEAN states, where they transfer important skills, bring technology and invest in communities.  For example, Citibank is the third largest employer in Singapore and over 80% of its employees are Singaporean.  Coca-Cola is investing USD $100 million into a major production effort in Myanmar as it opens up, which includes extensive worker education and skills-transfer as part of its strategy.  My colleague Ambassador Mitchell in Myanmar recently said of U.S. ventures, “We don’t extract, we invest.”

Two-way trade in goods between the U.S. and ASEAN grew to $217 billion in 2014, making ASEAN America’s fourth largest trading partner.  The ASEAN middle class is growing by leaps and bounds and the work force is young, with over 65 percent of the population – that is, more than 300 million people – under the age of 35.  The newly launched ASEAN Economic Community is bringing even more opportunities by reducing barriers to trade, services, capital, and skilled labor flow.  We want to keep this win-win going.

The United States government has invested tens of millions of dollars on programs like the ASEAN Single Window to help goods move more freely across borders.  Over the past few years, we partnered with the U.S.-ASEAN Business Council (USABC) to train over 3,500 small and medium sized business owners in ASEAN to support economic development.  This program actually connects SMEs with the global value chain.

YSEALI, our young leaders program, has featured many entrepreneurship workshops and prizes and regularly brings together in the region and also in the United States, young people from all 10 countries.  Over 60,000 18-35 year olds are now members.  President Obama met with 500 of them in Kuala Lumpur in November.

These are just a few examples of our many initiatives to support ASEAN and our shared vision for a peaceful, prosperous region.

The second reason for our engagement is that ASEAN is a strategic partner for the U.S. on key transnational challenges which face us all— climate change, illegal fishing, cyber security, human and wildlife trafficking, disaster response, and, of course, terrorism just to name a few.

The terrible attack in Jakarta last week is a reminder that we can always do more.  We stand in solidarity with our Indonesian partners and reaffirm our determination to continue to work with the government to combat the shared threat of terrorism.

On another topic, let me congratulate ASEAN for passing its convention on trafficking in persons this past November.  I look forward to working with counterparts and colleagues on this critical issue, as does the rest of the U.S. Government.

Another challenge that I have focused on during my time in the region is the degradation of marine and coastal ecosystems due to overfishing and illegal, unreported and unregulated fishing (IUU fishing). As you well know, Southeast Asia is home to a greater concentration of marine biodiversity than anywhere else in the world.  The waters in this region support many thousands of fish and invertebrate species that are vital for maintaining healthy ecosystems, and for providing food and livelihoods for millions of people in Southeast Asia and around the world.

This marine bounty, and by extension, the food security and economic security of many people in the region, is under severe threat.  IUU fishing has been identified as a leading threat to the health of fish stocks and ecosystems.  It is therefore a serious threat to the long-term security of people who depend on oceans and fisheries for their life and their livelihoods.

We need to facilitate that trade and reward honest fishers, especially here in Southeast Asia, where many countries rank among the top 20 fishing economies and which produces 17% of the world’s wild-caught fish.  So we must pursue trade and environment policies that support each other.  We need to find a balance so we can have our fish and eat it too.

In late August at the 22nd ASEAN Regional Forum in Kuala Lumpur, I was very pleased that the Foreign Ministers adopted the Statement on Strengthened Cooperation on Marine Environmental Protection and Conservation that was co-sponsored by the United States, China, Singapore and Vietnam.  Likewise, it was gratifying to see leaders endorse the Indonesia-U.S. co-sponsored EAS Statement on Enhancing Regional Maritime Cooperation last November.

These are examples of working regionally to address and make progress on today’s most pressing issues, issues which affect not just us but the entire world.

The third reason the United States will have a long-term focus on ASEAN is because an integrated, unified ASEAN, is geopolitically stabilizing.  It is stabilizing because it works to institutionalize cooperation, threatens no one, dedicates itself to non-violence and seeks strategic independence.

ASEAN forms the stable center of a region with multiple big powers.  No one ASEAN country can easily stand up to a big power when it takes actions that increase tensions and risks, but ASEAN as a group can and has.  We want Asia to continue to enjoy the peace that has allowed so many to prosper and ASEAN is a critical part of that.  ASEAN leads by example.  It has helped to preserve stability among its diverse member nations for nearly 50 years.

If you think about the environment in Southeast Asia at the time of its founding, with some ASEAN countries in open conflict with one another, with big powers vying for supremacy in proxy conflicts, it is remarkable how stable ASEAN is today.  A number of other regions in the world cannot claim that.  And it is this peaceful foundation that has allowed economies here to take off.

The historical relationships among the big powers are long and varied and have shifted over the nearly five decades since ASEAN was founded.  But today, the United States, Australia, Canada, China, Japan, South Korea, India, Russia, New Zealand, and the EU as dialogue partners, engage constructively with ASEAN and with each other under the ASEAN umbrella, in economics and finance, politics and security, and cultural cooperation and exchanges.

No one else can bring all the countries of Asia together at the East Asia Summit and ASEAN Regional Forum to discuss difficult strategic questions.  It’s vital that we discuss these issues and not sweep them under the rug.

Finally, but in some ways most important in my list of five reasons why the United States is focused on ASEAN:   ASEAN plays a vital role in advancing a rules-based order for the Asia Pacific.  That is what the ASEAN Community is made of.  It connects the ten countries and people — How?  Through common rules, norms, procedures and standards.

ASEAN also shares respect for international law which connects it to outside powers and defines expectations for our behavior.  What binds ASEAN is a shared commitment to a set of principles.  The Leaders—past and present— set out these principles in the adoption of the ASEAN Charter in 2007 and in the Roadmaps, including Vision 2025.  Providing ASEAN with this legal identity was a major milestone in envisioning what a rules-based regional institution can be.

Three important principles connecting ASEAN are respect for the rule of law, non-violent resolution of disputes and the upholding of international law. This set of rules and norms supports all the other connections among ASEAN nations.  Rules and norms create predictability.  They create a sense of fairness because all countries have the same burden of compliance and responsibility.

For years to come, Southeast Asia will continue to play a significant role in promoting peace, stability and economic prosperity so all its human and natural resources can thrive.  ASEAN is helping to underwrite peace in the region and is charting the course for an integrated ASEAN Community.

For the reasons I just named and many others, America will be here, deeply engaged in ASEAN, on ASEAN’s terms, as ASEAN’s terms are about rule of law and respect for international law, for generations to come.  You can count on that.