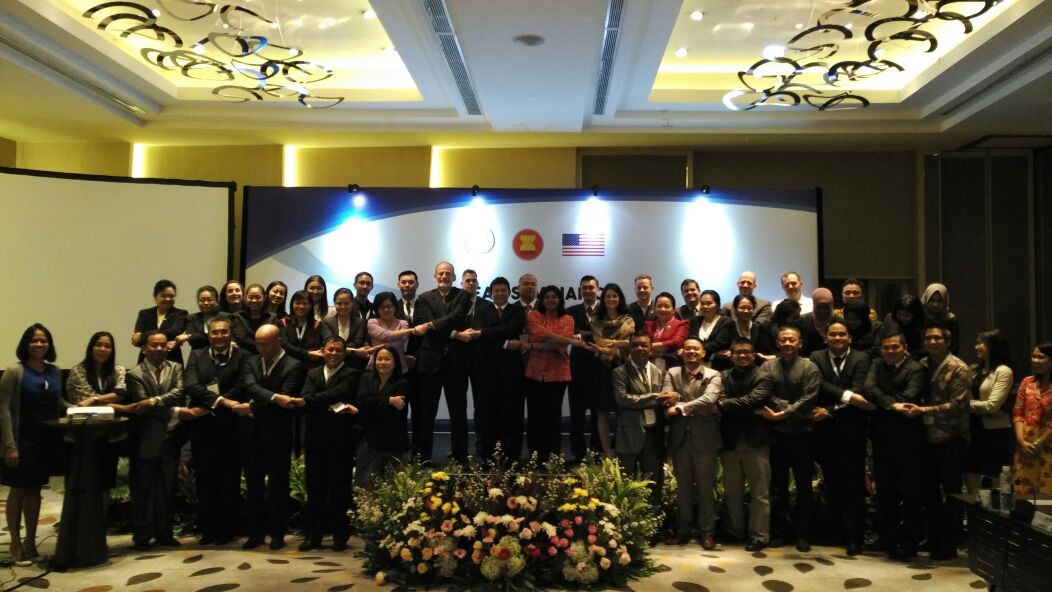 It is a good to see you all today, coming together to address this serious crime. This seminar is an important venue for ASEAN Member States’ officials to continue their valuable work on the implementation of provisions in the ASEAN Convention Against Trafficking in Persons, Especially Women and Children (ACTIP).

I would like to extend our appreciation to the International Organization of Migration and the ASEAN Senior Officials Meeting on Transnational Crime (SOMTC) for bringing us together. This is an opportunity to share best practices and discuss ways to collaboratively combat Trafficking in Persons, in particular male victims of labor trafficking, who are often unintentionally overlooked because most of the focus of trafficking prevention, as Marc said, is typically women and children.

We also welcome and express our sincere appreciation to all the participants from member state’s labor and social welfare ministries, representatives of their countries on the ASEAN Intergovernmental Human Rights Commission (AICHR) and representatives from the ASEAN Commission on the Protection of the Rights of Women and Children (ACWC).

It is appropriate that the SOMTC is leading this workshop because trafficking itself is a crime and the links between human trafficking and other criminal activities such as human smuggling, drug trafficking, money laundering and organized crime, are well known. The impact of human trafficking on surrounding communities includes increased crime and gang activity, child exploitation, public health problems and depressed wages.

But, first and foremost, your work is important because of the victims and their terrible suffering. I am haunted by stories like one that appeared last year in the NY Times of a Cambodian boy, Lang Long. After watching his younger siblings go hungry because their family’s rice patch could not provide enough food for everyone, he accepted a trafficker’s offer to travel across the Thai border for what he was told was a construction job.

It was his chance to start over, he thought, and provide for his family. But when he arrived, Mr. Long was kept for days by armed men in a room near the port at Samut Prakan. He was then herded with other migrants up a gangway onto a shoddy wooden ship. It was the start of three brutal years in captivity at sea.

Although Mr. Long was eventually rescued by an aid group, stories like his are not uncommon in the maritime world. Men and boys like Mr. Long are lured by traffickers only to become sea slaves in floating prisons. Labor abuse at sea can be so severe that the boys and men who are its victims might as well be captives from a bygone era. In interviews, those who fled recounted horrific violence: the sick were cast overboard, the defiant were beheaded, the insubordinate were sealed for days below deck in a dark, fetid fish hold.

Often these men and boys are beaten for the smallest transgressions, like stitching a torn net too slowly or mistakenly placing a mackerel into a bucket for herring, according to a United Nations survey of about 50 men and boys sold to fishing boats. Of the 50 interviewed in this survey, 29 said they had witnessed their captain or other supervisor kill a worker.

These harsh practices and lawlessness have intensified in recent years, as a review of hundreds of accounts from escaped deckhands provided to police, immigration and human rights workers shows. That is because of inadequate maritime laws and an insatiable global demand for seafood even as most fishing stocks in this region are dangerously depleted. Part of the demand includes for fish in petfood sold in the US, like the kind that Mr. Long’s boat caught.

With local fish stocks gone in many countries, we know there is now a greater reliance on long-haul fishing, in which vessels stay at sea, sometimes for years, far from the reach of authorities. The good news is that, thanks to the media attention on this issue, American and other consumers are now much more aware of the problem and companies are working to clean-up their supply chains.

Combatting trafficking in persons has been and continues to be a top priority for the United States. We are boosting our commitment to ASEAN in this area, as announced by President Obama at the ASEAN-U.S. Summit. Through the U. S. Agency for International Development, we committed $21.5 million for a five-year regional Counter Trafficking in Persons program. The activity will focus on strengthening cross-border collaboration between source, transit, and destination countries. It will leverage the private sector to reduce human trafficking in global supply chains—which is especially relevant for male victims of trafficking in this region, and support improved research and data collection to ensure human trafficking interventions are targeted and effective.

During the rest of this Administration and beyond, the United States will remain a strong global advocate for increased international cooperation and responsibility-sharing on migration and human-trafficking challenges.

I want to congratulate ASEAN again for endorsing ACTIP and the ASEAN Plan of Action that emphasize cross sectoral cooperation to combat Trafficking in Persons. ASEAN demonstrated a strong commitment and taken practical measures to combat trafficking at both the regional and national levels, and the ASEAN commitment to address human trafficking is being recognized internationally.

Prior to the adoption of the ACTIP, AICHR and SOMTC held the first Joint Workshop on the “Human Rights-based Approach to Combat Trafficking in Persons” in November 2015 in Yogyakarta. We were pleased to support that first meeting and to work together with the EU to support the second such meeting here in Jakarta at the end of September this year.

The United States is proud to continue the longstanding partnership with ASEAN to combat trafficking. Implementing the ACTIP is both a vital and a very challenging task indeed. It is comprehensive–covering prevention of trafficking, protection and treatment of victims, and promotion of international cooperation. The multi-dimensional nature of ACTIP means that cross-sectoral coordination will be the only way to ensure successful implementation.

In unison, the various ASEAN sectoral bodies can produce the appropriate policies, guidelines, technical regulations, programs, and capacity-building activities to combat trafficking, and to protect and treat the victims through a rights-based approach.

We in the U.S. Government would like to continue supporting your efforts, particularly in the areas of victim protection and services, and in specific items mentioned in the ACTIP such as victim compensation schemes.

Your participation in this workshop demonstrates a firm commitment to combating trafficking in the region, and determining priority areas of collaboration in implementing ACTIP.

We hope this event will provide a platform for continuous interaction among ASEAN’s relevant bodies, give participants a unique opportunity to exchange with experts on similar trafficking issues in Central Asia, and better understand the labor side of human trafficking.

Again, it is a great honor to help officially open this seminar, and to be here with you today.

I wish you all a very productive workshop.