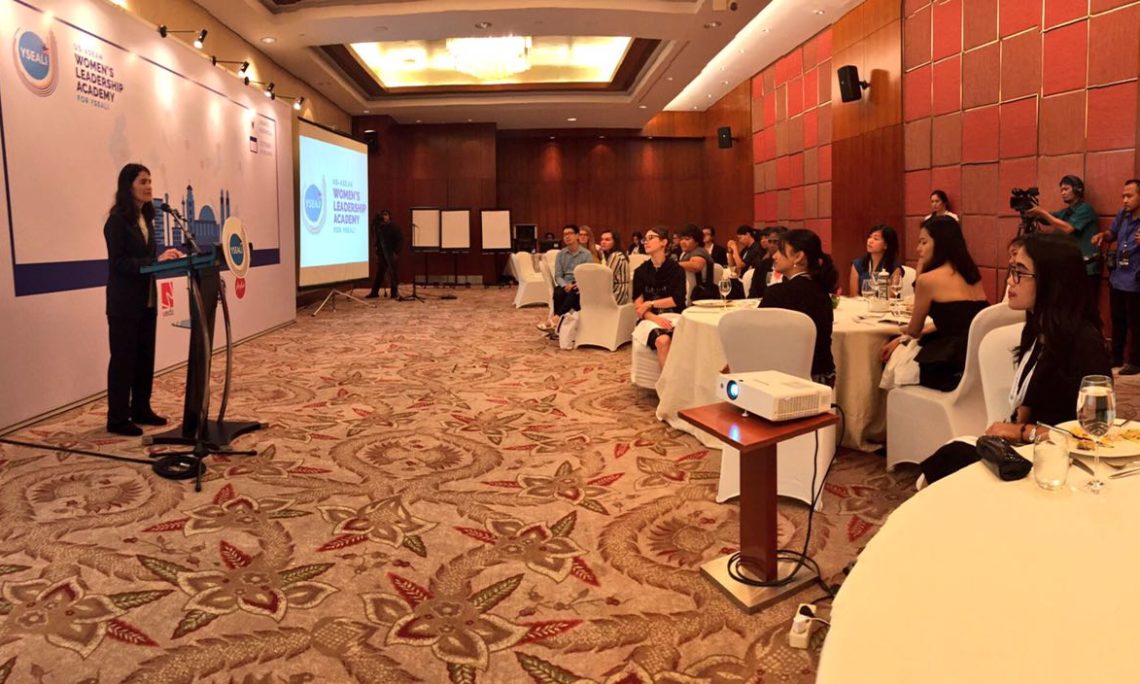 Welcome to Jakarta! I am so pleased to be here with all of you young women leaders of ASEAN. I was so excited when President Obama announced the U.S. – ASEAN Women’s Leadership Academy for YSEALI last month in Laos. And I’m even more excited that it’s happening. I want to congratulate you on your acceptance to this Academy and I very much hope the next few days will be a memorable and useful experience both personally and professionally as you further develop your skills, make plans for your future and get to know your colleagues and mentors.

Thank you to our partner Wedu that is helping us with the Academy and making sure that you all will have a good experience. I would also like to thank Air Asia for flying in all of you to Jakarta today and back to your home country later after the Academy ends. And let me also acknowledge the great support from Visa, General Electric, and IBM. You’ll meet senior representatives from those companies during some of the sessions this week.

Women’s rights in the ASEAN Member States have seen significant progress in the last five years. Data shows that there has been greater access to education, an increase in life expectancy and a decrease in women dying during childbirth. More women in Indonesia, Malaysia, Thailand, Vietnam, and the Philippines are enrolling in higher education programs.

That said, many obstacles remain that are preventing women’s equal participation in and benefit from ASEAN economic growth and development.

And that equality of opportunity is very important. Not just because it’s right. But also because it makes sense not just for women, but for all of society.

Promoting opportunities for women is not just a women’s issue. It’s also a development issue. According to the International Labor Organization, women’s work, both paid and unpaid, may be the single most important poverty-reducing factor in developing economies. Studies have shown repeatedly that women are more likely to invest a large proportion of their household income in the education of their children, increasing opportunity for the next generation. It’s not that men don’t care for their families–they do–but men contribute 30-40% of their wages into their household whereas women reinvest about 90% of their incomes.

Similar benefits come from increasing women’s access to education. Educated women are better at managing their own and their family’s health issues, thereby reducing infant and maternal mortality, as well as health-care costs. A study using data from 219 countries from 1970 to 2009 found that, for every one additional year of education for women of reproductive age, child mortality decreased by nearly 10%. That’s a clear, incredibly important connection.

Women’s opportunity is also an economic growth issue. Increased educational attainment accounts for about 50% of the economic growth in OECD countries over the past 50 years, of which over half is due to girls having had access to higher levels of education. And a recent UN Women report concluded that, in the Asia-Pacific region alone, removing barriers to full participation of women in the workforce could boost GDP by $89 billion U.S. dollars every year. Think about that – $89 billion dollars – EVERY YEAR. So it’s clear when societies engage, train and invest in women, the broader community benefits.

It’s also an issue of profits. The Peterson Institute for International Economics, a prestigious research organization in Washington DC recently did a huge survey of nearly 22,000 companies in 91 different countries. And this landmark study showed a remarkable thing—the more women were in senior positions in companies, the more profitable those companies were. To the point where an increase in the share of women bosses from zero to 30 percent in a company would be associated with a 15 percent rise in profitability. So that’s just stunning.

So for all these reasons, one of my top priorities as U.S. Ambassador to ASEAN is to promote opportunities for women in ASEAN. As we would say in the US: it’s a “no-brainer.” Meaning, it’s the obvious choice.

Another one of our top priorities is to cultivate young leaders in ASEAN, and the United States is delighted to work with the young people in this region to help them contribute to Southeast Asia and to our world.

I’ve been involved in YSEALI, Young Southeast Asian Leaders Initiative, from close to the beginning and, YSEALI, which will be three years old this December, has grown into one of the most successful programs like this that the United States has anywhere in the world. We now have almost 100,000 YSEALI members across all 10 ASEAN countries, which is really pretty amazing.

I hope this YSEALI program is a useful experience for you. You have an exciting week ahead of you, where you will discuss regional challenges and key gender issues in the region, have a skills assessment session, and a Mentor Day. Also, you will join me at @america where I will lead a panel with four great leaders to offer you some tips about what we have learned along the way.

I hope that this Academy will enhance your skills and offer ideas and inspiration for your future. I also hope it gives you a new set of friends who will help keep you going once this week is over.

I am confident that the future for ASEAN is bright – especially with young leaders like you! I look forward to getting to know you a little bit this week.