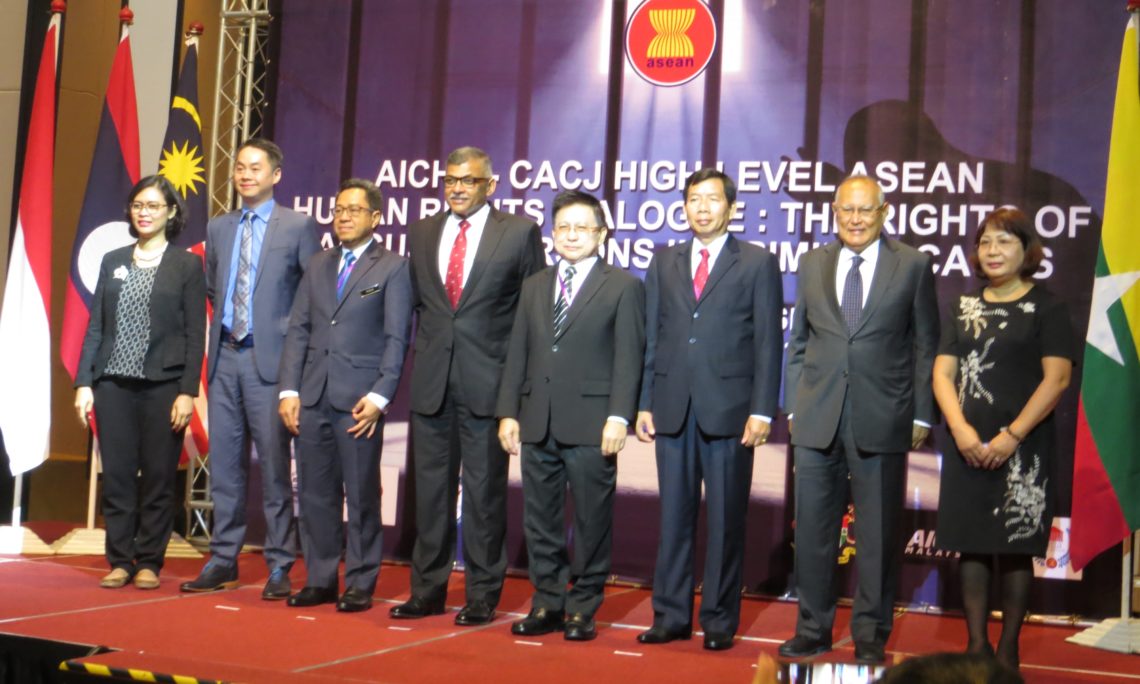 The U.S. Government through the ASEAN-USAID PROSPECT project supported the ASEAN Inter-governmental Commission on Human Rights (AICHR) to convene a “High-Level Dialogue on the Rights of Accused Persons in Criminal Cases.”  The event, co-hosted by the Council of ASEAN Chief Justices (CACJ), marked the second time the U.S. Government has supported high-level dialogue amongst the preeminent human rights and judicial organs in ASEAN. In March 2017, the AICHR Judicial Colloquium was held in Kuala Lumpur, which produced a series of recommendations, including continued dialogue.

Following a welcome dinner held on the evening of the 10th, the one-day event brought together over 40 senior officials, including Chief Justices from Malaysia, Singapore, and Lao PDR and representatives from 7 of the 10 ASEAN supreme courts. In addition, AICHR representatives from Malaysia, Singapore, Indonesia, and Vietnam were in attendance. Participants spent the morning session sharing good practices, challenges, and commonalities with regards to the pre-trail, trail, and appeals processes at the domestic level pertaining to the rights of accused persons in each of the 7 ASEAN Member States represented. The afternoon session provides further opportunities for sharing amongst participants and culminates in developing a summary record capturing common understanding vis-à-vis rights of the accused in criminal cases per the ASEAN Human Rights Declaration as well as discussion on next steps and plans for continued dialogue.

In his opening remarks, Ambassador Barry Desker, the Chair of AICHR, reinforced the importance of developing a common understanding on human rights issues under the law, emphasizing that citizens’ confidence in justice and rule of law underpins faith in the law and allows it to function. Ambassador Desker went on to say that ASEAN’s diversity is the very basis of its dynamism and provides the opportunity to learn from one another despite its diverse legal and political systems. In his keynote address, Malaysia’s Chief Justice, Tan Sri Datuk Seri Panlima Richard Malanjum, echoed the sentiments of AICHR Chair, reinforcing the need for institutionalizing meaningful exchanges and dialogue, such as this, to promote common understanding among ASEAN Member States on critical human rights issues.

The U.S. Government support for today’s dialogue is part of its ongoing support to the AICHR and its efforts to mainstream human rights throughout critical sectors within ASEAN and as a convener of expertise and officials on pressing human rights topics.