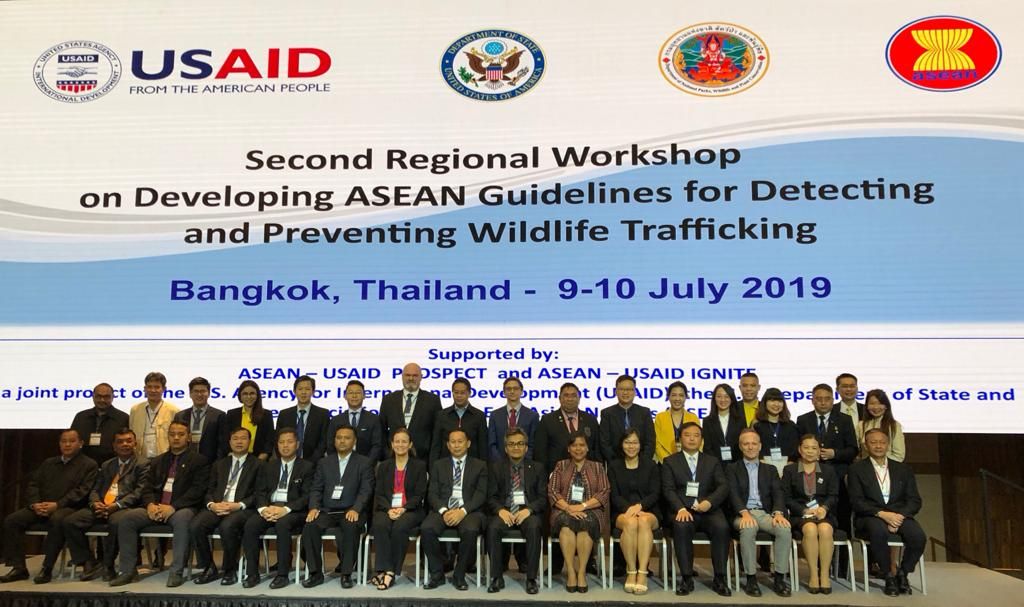 July 9, 2019, Bangkok. The U.S. Government continued its support through the ASEAN-USAID PROSPECT project to regional efforts to counter illicit trafficking of wildlife. PROSPECT is providing technical expertise to help ASEAN develop a set of regional Guidelines for Detecting and Preventing Wildlife Trafficking in addition to providing an opportunity for relevant stakeholders to review, revise, and refine the draft through multiple consultations.

In Bangkok today, over 40 participants, including officials from the ASEAN Working Group on Convention on International Trade in Endangered Species of Wild Fauna and Flora (CITES) for Wildlife Enforcement (WG-CITES-WE) represented by Senior Officials on Forestry (ASOF) and the ASEAN Directors-General for Customs and the Working Group on Illicit Trafficking in Wildlife and Timber (WG-ITWT) represented by the Senior Officials Meeting on Transnational Crime (SOMTC). Working group participants were also joined by representatives from the Anti-Money Laundering Organization of Thailand, USAID’s Wildlife Asia Project, the United Nations Office of Drugs and Crime’s Global Programme for Combating Wildlife and Forest Crime, the Asia Pacific Regional Office for Capacity Building, and the World Customs Organization among others.

Thailand’s Director of Division of Wild Fauna and Flora Protection, Ministry of Natural Resources and Environment, Mr. Somkiat Soontornpitakkool, gave the opening remarks, emphasizing the importance of combating illicit trafficking in wildlife and achieving ASEAN’s goals, including through the development of the ASEAN Guidelines, which were mandated during the Special Ministerial Meeting on Illegal Wildlife Trade in March of this year. Ms. Cristina Velez Srinivasan, Director (acting) of USAID/RDMA’s Regional Environment Office praising ASEAN Member States for their commitment to strengthen regional efforts and collaboration as directed by the ASEAN Minister’s Declaration in Combating Transnational Crime (2015). She went on to say that the U.S. Government joins with ASEAN in this fight through its “Eliminate, Neutralize, and Disrupt Wildlife Trafficking Act,” or END Act, passed by the U.S. Congress in 2016. She also stressed that the U.S. effort is multisectoral as well, taking a whole of government approach, which includes programs through U.S. Department of State, U.S. Department of Justice, and the U.S. Department of the Interior’s Fish and Wildlife Service.

Over the course of two days, participants will discuss, debate, and ultimately provide their suggestions and inputs for the ASEAN Guidelines, which will lay out principles for inter-country data sharing and joint-operation mechanisms, including policy making collaboration, as well as reaffirm ASEAN’s commitment to cooperate on wildlife crime prevention and detection. Following the finalization of the Guidelines in the coming weeks, they will be presented for endorsement at the upcoming ASEAN Senior Officials Meeting on Forestry July 18th – 19th.